US President Donald Trump has tweeted a statement suggesting that the Iran nuclear deal, an internationally acclaimed multilateral accord, is a thing of the past. That is despite all other signatories reaffirming their commitment.

In a tweet on Sunday, Trump lauded his own decision to opt out of the landmark agreement reached between the US, the UK, France, Russia, China, Germany and Iran in 2015 after months of tedious negotiations.

“Remember how badly Iran was behaving with the Iran Deal in place. They were trying to take over the Middle East by whatever means necessary. Now, that will not happen!” Trump tweeted, suggesting that his unilateral withdrawal already killed the agreement.

Remember how badly Iran was behaving with the Iran Deal in place. They were trying to take over the Middle East by whatever means necessary. Now, that will not happen!

All other parties to the agreement, including the “rogue” Iran itself, pledged to stick to its terms and discuss the impact of the US pullout in upcoming talks. Several European leaders, such as President of the European Commission Jean-Claude Juncker and EU top diplomat Federica Mogherini, signaled that Europe is done doing the US’ bidding and may break with its powerful ally to pursue its own interests, as Washington threatened to hit European businesses in Iran with revived economic sanctions.

Trump has again accused Iran of “bad behavior,” like he did when he had just withdrawn from the nuclear deal, saying Tehran sowed “bedlam and death” wherever it was present. 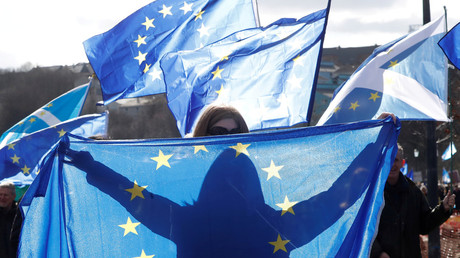 “If you look at what’s happening in the Middle East with Syria, with Yemen, with all of the places they’re involved, it’s bedlam and death,” Trump said on Wednesday.

Both those countries are indeed in dire situations, mired in war and humanitarian disaster. Syria’s civil war was started by US-backed anti-government rebels, and it allowed terrorist groups to dig in and thrive on Syrian soil – something that Iran is helping the Syrian government combat.

Yemen has been reduced to a point of infrastructural collapse, widespread hunger and displacement after three years of relentless bombings by US ally Saudi Arabia. The Saudis seek to reinstate ousted Yemeni President Abdu Rabbu Mansour Hadi, who was overthrown by Houthi rebels, and it accuses Iran of supplying the Houthis with missiles.

Hundreds of Yemeni civilians have been killed in Saudi-led airstrikes, and a Saudi economic blockade impedes much-needed humanitarian assistance to the country, where some 80 percent of the population is in dire need of humanitarian aid.