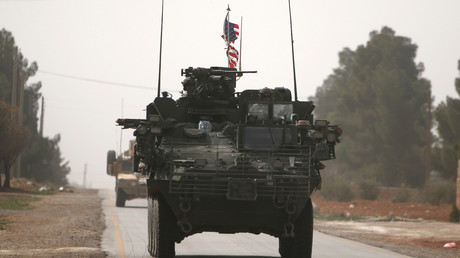 Donald Trump has tweeted that ISIS has been defeated amid reports that Washington is planning to “rapidly” pull out all its troops from Syria.

The decision was allegedly taken by President Donald Trump himself, who had repeatedly expressed his intent to get out of the Arab Republic earlier. However, the Pentagon apparently opposes the move. The potential withdrawal would upend assumption about the long-term US presence in the war-ravaged country, which was particularly backed by the Defense Secretary James Mattis.

The schedule, as well as the details of the alleged withdrawal, are yet unknown. While the Pentagon and the White House did not issue any official statements on the issue, Trump said in a Twitter post that Islamic State (IS, formerly ISIS/ISIL), which he called “the only reason for [the US troops] being there [in Syria],” has been defeted, apparently signaling that there was no reason for the US to stay on the ground in Syria any longer.

Pentagon spokesperson Cmdr. Sean Robertson said three months ago that ISIS “is well-positioned to rebuild and work on enabling its physical caliphate to re-emerge. It’s probably still more capable than al-Qaida in Iraq at its peak in 2006-2007.” https://t.co/luyBT3cQS0

According to some reports, the withdrawal might primarily affect the US troops on the ground working together with an alliance of Arab and Kurdish militias, known as the Syrian Democratic Forces (SDF). The US has a total of 2,000 servicemen there, who are particularly involved in training the local militias. The news come as the SDF are reportedly on the verge of retaking one of the terrorist group’s last major strongholds – the town of Hajin, located east of the Euphrates.

However, even after the withdrawal, the US would still maintain a sizeable presence in the neighboring Iraq, with some 5,200 troops stationed just across the Syrian border. The aircraft of the US-led coalition – the primary tool of Washington and its allies in the Syrian conflict – will also still be able to continue their air raids flying out of Qatar and other bases in the Middle East.

Washington’s decision also comes days after the Turkish President Recep Tayyip Erdogan urged the US to make its Kurdish allies withdraw from the town of Manbij, located west of the Euphrates, in the northeastern Syria.

Also on rt.com
US needs 35-40k local fighters in Syria, only 20% there now – General Dunford


Ankara considers Syrian Kurdish paramilitaries as an extension of the Turkey-based anti-government guerrillas and brands the Syrian Kurdish YPG militia as terrorists. Erdogan threatened to order his troops to storm the town if the US fails to fulfill his demand. Last week, he announced plans to launch a military operation in the Kurdish areas “within days.”

In early December, Chairman of the Joint Chiefs of Staff General Joseph Dunford complained that the US lacks trained local fighters on the ground to “provide stability” to Syria.

Trump made an announcement that the US would be leaving Syria “very soon” back in March and never officially walked it back.