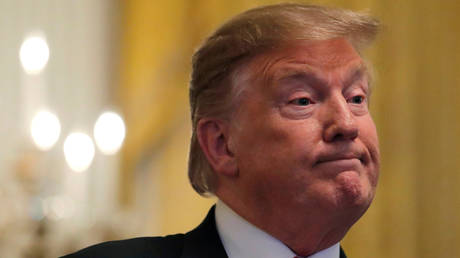 US President Donald Trump has said he would veto a Congressional effort to block his recent ‘national emergency’ declaration and prevent him building a wall along the Mexican border.

After failing to secure the $5.7 billion he’d requested from Congress for his long-promised border wall, the president declared a national emergency last week. The declaration allows Trump to move funding from other parts of government to the wall.

House Democrats introduced a resolution on Friday, aimed at blocking Trump’s emergency edict. The resolution has 222 co-sponsors and is all but guaranteed to pass the Democrat-controlled House of Representatives.

The Republican-majority Senate might prove more difficult, but at least one Republican senator, Alaska’s Lisa Murkowski, has indicated that she will likely cross the aisle and vote in favor of the resolution. While “a handful” of Republicans might side with the Democrats, Sen. Lindsey Graham (R-South Carolina) said on Friday, “there will be enough left to sustain a veto.”

Also on rt.com
16 states sue Trump over use of emergency powers to build border wall


Even if the resolution passed both houses of Congress, a veto from the president would instantly shoot it down, unless Congress came with a two-thirds majority, an extremely unlikely scenario.

The fate of Trump’s declaration and, therefore, of the wall, will likely be decided by the courts. At least five lawsuits have already been filed challenging the declaration, and Trump himself said last week that he expects the legal battle to be a drawn-out slog. “We will be sued…we will possibly get a bad ruling, and then we will get another bad ruling, and then we will end up in the Supreme Court,” Trump said. “Hopefully we will get a fair shake, and we will win in the Supreme Court, just like the (travel) ban.”