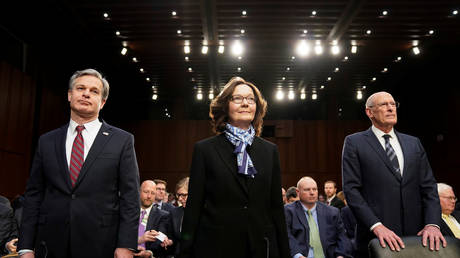 US President Donald Trump has reversed course on his spymasters’ threat assessment, insisting his initial negative reaction – in which he dismissed their reports as “wrong” and “naïve” – was based on (what else?) fake news.

Trump accused the press of “mischaracterizing” the agency chiefs’ Senate testimony earlier this week, in which they explained how much America should be concerned with ISIS, Iran, North Korea and others. The president initially lashed out at their assessment, criticizing their failure to recognize Tehran as a major threat to the US. After meeting his top spies in person, though, he insisted they all agree “very much” – a total 180 from Wednesday morning.

….I would suggest you read the COMPLETE testimony from Tuesday. A false narrative is so bad for our Country. I value our intelligence community. Happily, we had a very good meeting, and we are all on the same page!

The president told non-believers to go read the “COMPLETE testimony” – though the words had not changed since Tuesday, when Director of National Intelligence Dan Coats and CIA chief Gina Haspel publicly contradicted many of Trump’s policy statements. In particular, Coats said Iran was still complying with the Obama-era nuclear deal and did not appear to be trying to make the A-bomb.


Iran appears to be the only region in which US intelligence doesn’t see a clear and present danger – ISIS, China, North Korea, even the UK all pose dangers to the American empire for this or that reason, according to the spy chiefs.

Twitter reminded Trump that Coats and Haspel had testified on live television.

Their testimony was aired live on television. How was it distorted?

They were giving sworn, televised testimony in front of the United States Congress in which they directly contradicted things that Trump has said about the nuclear threat from North Korea and Iran and about the threat from the southern border.

The media “mischaracterized” their words by transmitting the testimony through live video into the homes of Americans who watched the hearing on television?

Compounding the “who’re you going to believe, me or your lying eyes” routine, Trump didn’t even bother to delete the tweets where he called “the Intelligence people” “wrong” and “passive” concerning their Iran assessment and told them to “go back to school.”

The Intelligence people seem to be extremely passive and naive when it comes to the dangers of Iran. They are wrong! When I became President Iran was making trouble all over the Middle East, and beyond. Since ending the terrible Iran Nuclear Deal, they are MUCH different, but….

….a source of potential danger and conflict. They are testing Rockets (last week) and more, and are coming very close to the edge. There economy is now crashing, which is the only thing holding them back. Be careful of Iran. Perhaps Intelligence should go back to school!

Before the Thursday meeting, Trump seemed to double down on his disagreement with his spies, telling the press “I disagree with certain things they said,” and insisting “Time will prove me right, probably.”

Considering how things changed, one can only speculate that some high-end recruitment techniques were used on the President.