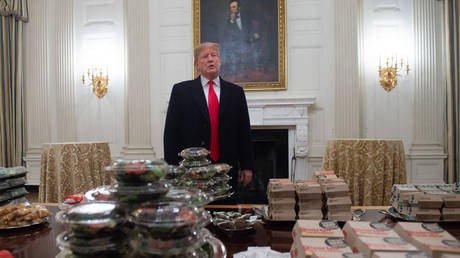 Trump splashed his own cash on the treat for the footballers, who won their second national championship just a week ago, and he blamed the government shutdown for the lack of in-house cooks. The smorgasbord was served at the White House East Room, with piles of hamburgers and French fries resting on silver plates beneath a golden candelabra.

Before letting the players feast, Trump touted the treat, telling reporters that it was his favorite food.

“I Like it all. It’s all good stuff. Great American food,” Trump said. Trump has always been noted for his love for junk food, especially for McDonald’s and Diet Coke. Rumor, spread by Michael Wolff’s book ‘Fire and Fury,’ has it that Trump has developed a thing for fast food because he is afraid of being poisoned. Whether it’s true or an urban legend, Trump, as he hosted the Tigers on Monday, again professed his love for unhealthy snacks.

“We have pizzas, we have 300 hamburgers, many, many French fries, all of our favorite foods. I want to see what’s here when we leave, because I don’t think it’s going to be much,” he said, as the celebrations were about to kick off.

While some raised eyebrows over the choice of cuisine, Trump said he saw no other option than to send for takeaway food, because of the record-breaking shutdown and because salads apparently aren’t legitimate food, by Trump standards.

“So I had a choice. Do we have no food for you? Because we have a shutdown. Or do we give you some little, quick salads that the first lady will make?”

“I said, you guys aren’t into salads,” Trump joked, to cheers from the crowd.

In a particularly bizarre observation on the White House lawn, he remarked that “they’d like it better than anything we could give,” adding that “we have some very large people that like to eat.”

White House Press Secretary Sarah Sanders confirmed that Trump fed the Tigers out of his own pocket.

“The President is personally paying for the event to be catered, with some of everyone’s favorite fast foods,” she said in a statement.

While the President seemed to be in high spirits and quite pleased with the way he got out of the conundrum, many on Twitter were not impressed.

Some called the royal cheeseburger treatment Trump had given to the college football champions a disrespect and him “cheep as f**k.”

Why does @realDonaldTrump think the Clemson champions, when they come to the White House, want to eat the fast food every college student eats every other night?

Others described the stunt as a “tacky” and a “pure embarrassment” on behalf of the commander-in-chief.

Bragging that Trump personally paid for fast food when his own hotel catering is just blocks away doesn’t make him look good Sarah.

A commenter pointed out that Trump might have simply opted for the “cheapest food available” for the occasion, while another noted that the team that has an “executive performance chief dietary coach” among its staff was likely left unimpressed.

Due to the government shutdown, Pres. Trump had to order out to feed the national champion Clemson football team.
So… he chose McDonalds, Wendy’s and Burger King. The same food the team could have got at a rest stop 😂 pic.twitter.com/UaAv4wvsjq

Clemson football has an “executive performance chef” dietary coach, whose specific job is to ensure the players do not eat the very food Donald Trump is serving them in the White House tonight https://t.co/oKCj202lhf

There were also those who agreed with Trump. “Find me a football player who wouldn’t love to be served a tray full of Big Macs. I guarantee you can’t,” a commenter wrote.

People are really finding a reason to complain that Trump had some football players over and served them a fast food feast. Find me a football player who wouldn’t love to be served a tray full of Big Macs. I guarantee you can’t .