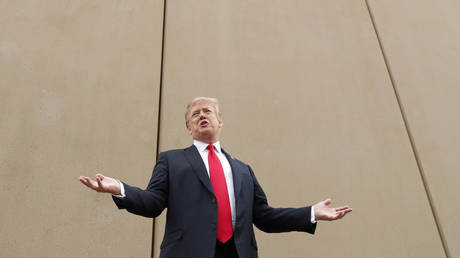 But the president seems to have taken issue with that explanation, and tweeted defiantly on Monday morning, confirming that his long-held desire for a fully-concrete wall at the southern border to curb illegal immigration was “NEVER ABANDONED” despite what “has been reported by the media.”

An all concrete Wall was NEVER ABANDONED, as has been reported by the media. Some areas will be all concrete but the experts at Border Patrol prefer a Wall that is see through (thereby making it possible to see what is happening on both sides). Makes sense to me!

The president appears to have been referring to the two-hour long exit interview Kelly gave to the Los Angeles Times, which was published on Sunday. In the interview, Kelly said that the idea of a concrete wall had been left behind “early on” in Trump’s administration. “To be honest, it’s not a wall,” Kelly said, adding that while Trump still uses the word wall, what he really means is a “barrier,” “fencing” or even “steel slats.”


But while Trump seems eager to dispel the notion that he has given up on a regular all-concrete wall, as Kelly claimed, he also seemed to contradict himself in the tweet, admitting that some border patrol experts would prefer a “see through” wall in “some areas” so they could “see what is happening on both sides.” It’s unclear exactly what an all-concrete “see through” wall might look like.

Trump has also used similar wording to Kelly in recent weeks, saying the wall could be a “beautiful” structure of “artistically designed steel slats.”

I campaigned on Border Security, which you cannot have without a strong and powerful Wall. Our Southern Border has long been an “Open Wound,” where drugs, criminals (including human traffickers) and illegals would pour into our Country. Dems should get back here an fix now!

During his interview with the Times, Kelly also said that the zero-tolerance policy at the border, which had resulted in the separation of children and parents, which caused international outrage, had been the then-Attorney General Jeff Sessions’ decision and it came as a “surprise” to the White House.

“What happened was Jeff Sessions, he was the one that instituted the zero-tolerance process on the border that resulted in both people being detained and the family separation,” Kelly said.

Kelly, who held the “bone-crushing hard job” of chief of staff for a year and a half, also said that Trump never asked him to break the law, saying that if the president had said “do it, or you’re fired” he would have resigned.