US President Donald Trump appears to have caved in to bipartisan demands to pay respects to late Sen. John McCain until he is laid to rest and ordered flags to fly at half-staff and delegating senior officials to the funeral.

In a statement released late Monday, Trump announced he ordered the re-lowering of the flags that were up again on Monday after being lowered for Saturday, the day of McCain’s death, and Sunday.

“Despite our differences on policy and politics, I respect Senator John McCain’s service to our country and, in his honor, have signed a proclamation to fly the flag of the United States at half-staff until the day of his interment,” the statement reads. 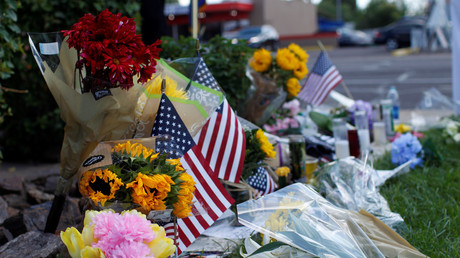 Trump also announced Vice President Mike Pence would deliver a speech at the farewell ceremony that is due to take place on Friday at Capitol Hill.

The controversial Senator McCain, a Vietnam War veteran and former prisoner of war, would be provided a military escort as he embarks on his final journey from Arizona to Washington and will be granted full military honors during a subsequent service at the United States Naval Academy.

Finally, although Trump was reportedly not invited to the funeral by the deceased himself, he delegated a cohort of high-ranking officials including Chief of Staff John Kelly, Defense Secretary Jim Mattis and National Security Advisor John Bolton to represent his administration at the ceremony.

After Trump noted the death of McCain in a concise and rather dryly-worded tweet on Saturday, without issuing an official statement, he faced a fierce backlash from both Democrats and Republicans. It was reported that the US President was offered to issue a eulogy that would heap praise on the Senator, with whom Trump had been at odds before and during his time in the office. However, Trump reportedly decided that extending sympathies to the bereft McCain family on Twitter would suffice.

Despite his sudden change of heart later on Monday, Trump dodged several chances to pay his respect to McCain earlier the same day. Asked at four separate occasions through the day to share his thoughts on McCain’s legacy and passing, Trump did not take up any of the opportunities, each time acting as if he hadn’t heard the question.