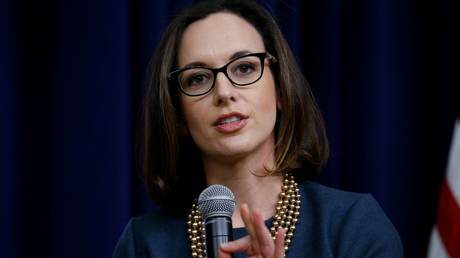 Trump-phobic journalists – including CNN employees – are up in arms over CNN’s decision to hire a GOP operative and former Trump administration official to help coordinate the network’s 2020 election coverage.

Sarah Isgur, who most recently worked as a spokesperson for the Department of Justice under the then-Attorney General Jeff Sessions, has been hired by CNN to “coordinate coverage across TV and digital” for the 2020 election cycle.

Her resume is peppered with prestigious GOP-related gigs, including a stint at the Republican National Committee and involvement in Mitt Romney’s 2012 presidential campaign. Although she was a vocal critic of Donald Trump during the 2016 presidential race, Isgur reportedly pledged loyalty to the president in order to secure her job at the State Department.

Isgur, who is set to start her job as a CNN political editor next month, appears to have no background in journalism. She does, however, have ample experience with roasting Democrats on Twitter.

In one tweet, she even described CNN as the “Clinton News Network” – a derogatory trope popular with Trump supporters.

Her hiring, which was first reported by Politico, has caused mass pandemonium amongst anti-Trump media outlets and personalities. Vox performed a merciless deep-dive on Isgur’s Twitter account, pulling up years-old rants against Hillary Clinton, abortion, and other sacrosanct pillars of Democratic Party dogma.

“This is the person CNN is entrusting with coordinating coverage of the 2020 campaign. What could possibly go wrong?” The article sarcastically concluded.

CNN’s Brian Stelter spoke to employees who, masked by anonymity, blasted the network for hiring Isgur.

One “baffled” editor said that CNN reporters were “up in arms” about the decision, while another staff member told Stelter that the new hire “feels like a disaster.”

A lot of people in #TheResistance no longer watch CNN because they employ RWNJ panelists who loudly spew propaganda & hate.

Now they’ve doubled-down by hiring a RWNJ as a senior level editor for all their 2020 campaign coverage.

CNN defended the move, saying that Isgur was more than qualified to take on the job, and will be “one of more than a dozen people who will be helping coordinate our political coverage.”

The attempt by CNN to placate its critics seems to have failed spectacularly, however, with droves of blue checkmarks beating their chests on Twitter over the issue.

“Please search for Sarah Isgur and see why she was trending, then realize 1000 qualified journalists are out of a job and ask out loud why did CNN hire her and who thought it would be a good idea?” wrote New York Times op-ed contributor Wajahat Ali.

Hi! Please search for Sarah Isgur and see why she was trending, then realize 1000 qualified journalists are out of a job and ask out loud why did CNN hire her and who thought it would be a good idea?

I’m guessing that anyone still treating CNN as a vehicle for serious political news coverage may have been quite troubled by this — but I don’t know any, so I can’t say for sure https://t.co/y4JLnDCasI

“How could anyone at CNN think this was a good ideas? There are just so many red flags here,” quipped LinkedIn News Editor Andrew Seaman.

Not even Fox News has former Trump officials running their news coverage. That’s how bad CNN is.

RT’s Going Underground got in on the fun, joking: “When ‘The Resistance’ formally becomes ‘The Assistance’.”

What prompted CNN to choose Isgur is a question that has given birth to numerous theories. One of the more intriguing scenarios was mentioned by Politico, which noted whispers among Trump supporters about how Isgur was the source of damaging leaks aimed at undermining the White House.