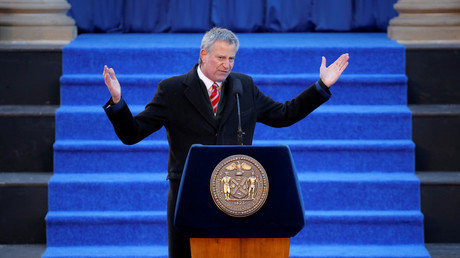 New York City Mayor Bill de Blasio is standing by his criticism of the media, calling the New York Post “divisive” and “dog-whistling,” while saying that he prefers the UK-based Guardian over the New York Times.

“The news media is pitiful and it’s sad for our city and our nation,” reads an email Hizzoner sent to his consultants at BerlinRosen in 2015, commenting on the negative coverage of his behavior during a Staten Island standoff in which a firefighter was shot.

De Blasio quite upset with media coverage after he hit the gym when a firefighter was shot & there was an active police standoff w shooter. He sounds like he is at war with the press. pic.twitter.com/Y2tUEnoRhy

That email was among the 4,200 pages made public by City Hall on Thursday, due to a lawsuit by NY1 and the New York Post. Reacting to the release on Friday, de Blasio denied he was at war with the press, but stood by his claims that New York would be better off if some local outlets perished.

“I will not shed a tear if that newspaper is no longer here,” he said of the New York Post, describing the paper as right-wing, distorting facts, using coded language (“dog whistles”) and divisive.

“The Post is not like everyone else,” the mayor said. “Their presence in our society unfortunately is harmful.”

Reporters from all over the political spectrum took issue with the mayor’s claim that coverage is influenced by who owns the media outlet.

“In theory of course it can, and yes, editorial boards ultimately answer to their publishers,” tweeted Josh Greenman of the New York Daily News, “But he vastly overstates ownership meddling in news coverage or editorial stances, which right now, in our case, is nil.” The Daily News was bought in 2017 by the Chicago-based Tronc.

De Blasio says media ownership influences coverage. In theory of course it can, and yes, editorial boards ultimately answer to their publishers. But he *vastly* overstates ownership meddling in news coverage or editorial stances, which right now, in our case, is nil. https://t.co/VSny3rFm7z

De Blasio’s emails reveal that he was not particularly enamored of the Daily News, even before the sale, when it was considered more liberal. Judging by the paper’s recent cover, the feeling is mutual.

A New York Times reporter noted that de Blasio expressed a preference for the Guardian, a liberal UK-based newspaper, over all the New York press.

He says he likes The Guardian, a British paper.

Even as he maintained his criticism of the media, de Blasio insisted that the line from the 2015 email about how “they will never defeat us” was not referring to the press, but to the “power of the status quo” in New York, whatever that may be.

De Blasio’s criticism of the press has already been compared to that of President Donald Trump, a fellow New Yorker who has not hesitated to call out hostile coverage “fake news” (often correctly so). Yet in the case of Hizzoner, CNN’s laments over the threat to democracy and civilization, routinely trotted out against Trump, were notably absent. Could it be because Trump is a Republican, and de Blasio is a Democrat?

Discontent with the state of the media in the US clearly crosses party lines, and reaches into the realm of business as well. Silicon Valley magnate Elon Musk recently announced he would be setting up a website ranking the credibility of publications, after complaining about biased and negative press coverage. He suggested naming it Pravda, in a sarcastic nod to the Soviet Communist Party broadsheet.