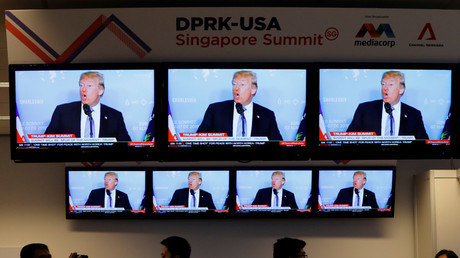 US President Donald Trump, apparently still fuming over “dishonest and weak” Justin Trudeau for threatening to respond to US tariffs in kind, took to Twitter to slam the Canadian PM again and vent his anger at the tight-fisted EU.

Canadian Prime Minister Justin Trudeau’s ill-fated press conference, where he vowed to retaliate to the tariffs imposed by the US on steel and aluminum, seems to have opened a can of worms, as less than 24 hours before his historic meeting with Kim Jong Un, the US leader continues to be preoccupied with imbalances in trade and “dishonest” Trudeau.

In a string of tweets on Sunday, Trump claimed that Canada made “almost 100 billion dollars in trade with US (guess they were bragging and got caught!).”

“Minimum is 17B,” he added, before going after the 270 percent taxes on US dairy products, the focus of one of his earlier diatribes.

Fair Trade is now to be called Fool Trade if it is not Reciprocal. According to a Canada release, they make almost 100 Billion Dollars in Trade with U.S. (guess they were bragging and got caught!). Minimum is 17B. Tax Dairy from us at 270%. Then Justin acts hurt when called out!

Launching another verbal blow at Trudeau, Trump said that, “Justin acts hurt when called out!” apparently referring to his pledge to impose the equivalent of the tariffs on the US that Trump has slapped on Canada.

Habitually blasting “unfair” trade relations where US partners end up with “massive trade surpluses” at Washington’s expense, Trump defended his heavy-handed approach of the issue by claiming his policies benefit American taxpayers, farmers and workers.

Why should I, as President of the United States, allow countries to continue to make Massive Trade Surpluses, as they have for decades, while our Farmers, Workers & Taxpayers have such a big and unfair price to pay? Not fair to the PEOPLE of America! $800 Billion Trade Deficit…

Trump, who seemingly decided to pour out his grievances with the rest of the Western world at once, then lashed out at “these same countries that rip us off on Trade” for their unwillingness to stump up their fair share for NATO.

Members of the military alliance agreed last year to boost their defense spending after being pressed by Trump, who accused 23 of 28 NATO states of owing “massive amounts of money” to Washington.

….And add to that the fact that the U.S. pays close to the entire cost of NATO-protecting many of these same countries that rip us off on Trade (they pay only a fraction of the cost-and laugh!). The European Union had a $151 Billion Surplus-should pay much more for Military!

A recently-released annual report on NATO spending showed that the overall defense spending by member states has been on the rise for the second year in a row, with European nations, as well as Canada, upping their contributions. However, the US was still way ahead of the others, donating 3.57 percent of its GDP, while European countries paid up 1.46 of GDP on average, with Canada lagging behind at 1.29 percent.

“Germany pays 1% (slowly) of GDP towards NATO, while we pay 4% of a MUCH larger GDP. Does anybody believe that makes sense? We protect Europe (which is good) at great financial loss, and then get unfairly clobbered on Trade,” Trump wrote, adding that changes are on the way.

He wrapped up his lengthy tirade by noting that his incendiary and undiplomatic rhetoric is ultimately aimed at advancing his “America first” agenda.

“We cannot let our friends, or enemies, take advantage of us on Trade anymore. We must put the American workers first!”

Sorry, we cannot let our friends, or enemies, take advantage of us on Trade anymore. We must put the American worker first!

While hardly anyone argues that the US, with its enormous $700 billion Pentagon budget, remains the biggest NATO financier, Trump’s claims of a huge trade deficit with Canada have been called into question, especially after he admitted in March that he lied to Trudeau about it at their bilateral meeting. Trump said he “had no idea” if the US had a trade deficit with Canada during a one-on-one meeting with the Canadian PM, but insisted on it anyway. The president later claimed that the statistics confirmed his inner feelings.

READ MORE: ‘Betrayal!’ Kudlow claims Trudeau ‘stabbed US in the back’ with G7 comments

In December, Trump said that the US has a trade deficit with Canada of “about $17 billion.” The claim came under intense scrutiny, with critics arguing that real estate mogul-turned-president manipulated the statistics to fit his agenda, as while there is a $12 billion deficit in goods, the US also runs a $25 billion surplus in services trade with Canada, the same statistics show.