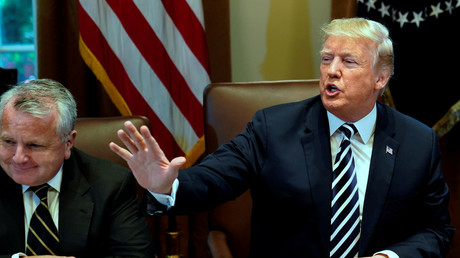 US President Donald Trump played Mr. Modesty, laughing off a question about getting the Nobel Peace Prize and saying that while “everyone thinks” he deserves one, he’s only interested in negotiating a nuclear-free Korea.

Following a cabinet meeting on Wednesday, Trump was asked by a reporter if he believes himself worthy of a Nobel.

It was South Korean President Moon Jae-in who said that Trump should get the prize if the two Koreas make peace, after the breakthrough April 30 summit with North Korean leader Kim Jong-un. A group of Republican lawmakers actually nominated Trump for the accolade last week.

Secretary of State Mike Pompeo is on his way back from North Korea with three Americans freed by Pyongyang as a gesture of goodwill ahead of the upcoming meeting between Trump and Kim. The place and time of the meeting have been arranged, though they have not been made public.

Meanwhile, Trump has announced that the US would withdraw from the 2015 nuclear deal with Iran and reimpose sanctions that were suspended under the agreement, also signed by the UK, France, Germany, Russia and China. Critics of the US president have raised the possibility that the Korea peace initiative might be adversely affected by the decision. So far, there have been no indications from Pyongyang or Seoul to that effect, however.