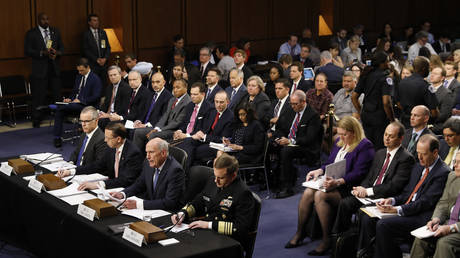 US President Donald Trump has taken note of leaked testimonies by senior FBI and DOJ officials implicated in spying on his campaign in 2016, but has yet to declassify the documents related to the FISA abuse scandal.

On Tuesday, Trump fired off two tweets, referencing a Fox News story about former FBI legal counsel James Baker’s testimony to the Republican-led House committee last October. The hearing was behind closed doors and the details of it are not available to the public, but tidbits have found their way to Fox this week.

Calling it an “unconstitutional hoax,” Trump brought up Baker’s alleged admission that he was involved in reviewing the Foreign Intelligence Surveillance Act (FISA) warrant application to spy on Trump campaign adviser Carter Page. The president also pointed out that Baker met with attorney Michael Sussmann of Perkins Coie, the law firm representing the Democratic Party that was used as a cutout by Hillary Clinton’s campaign to fund the so-called “Steele Dossier” alleging Trump’s ties to Russia.

Also on rt.com
Transcripts reveal FBI & DOJ were warned in 2016 about ‘bias’ in Steele dossier & ‘links’ to Clinton


Baker testified before the House last year, when Republicans still had a majority. The current House has a Democrat majority, which has made clear its priority is investigating Trump. It is unclear where the information about Baker’s testimony came from.

The leak about Baker comes just a few days after similar revelations about the testimony of Bruce Ohr, former high-ranking Justice Department official who was also implicated in the dossier scandal. Among other things, Ohr’s wife Nellie worked for Fusion GPS, the company that hired British spy Christopher Steele to write the dossier.


Ohr reportedly testified that he told a number of high-ranking FBI and DOJ officials, including deputy FBI director Andrew McCabe, about the credibility issues with Steele’s work. However, none of those objections made it into the FISA application, according to the memo by the House Intelligence Committee Republicans published last February.

That memo argued that the Steele dossier “formed an essential part” of the warrant obtained by the FBI on October 21, 2016 – three weeks prior to the election – and renewed three times afterward. The actual warrant remains classified, however.

In September, Trump ordered“immediate” declassification of all the FISA-related documents, but changed his mind just days later, citing DOJ concerns about a perceived negative impact on the “Russiagate” investigation conducted by special counsel Robert Mueller, as well as pleas from unnamed allies saying the documents contained sensitive intelligence content.

While the FBI’s investigation failed to turn up any evidence that Trump was in any way connected to Russia, there have been repeated revelations casting a cloud on the conduct of the Bureau and the DOJ during the 2016 election campaign – notably the thousands of texts and emails between senior FBI agent Peter Strzok and attorney Lisa Page, exchanged in the course of their extramarital affair.


Strzok and Page openly talked about despising Trump and his supporters and at one point discussed an “insurance policy” and stopping him from getting elected. Some 50,000 of their messages from a crucial time period when the duo worked for Mueller’s investigation have vanished in what the FBI called a technical glitch.

Leaks from Page’s own closed-door testimony in December indicated the FBI had no evidence of “collusion” with Russia when it launched the investigation into Trump in 2106.


As for Baker’s meeting with Sussman, Perkins Coie denied back in October that he was acting on behalf of the company, saying instead it was an unrelated cybersecurity matter.

“When Sussmann met with Mr. Baker on behalf of a client, the meeting was not connected to the firm’s representation of the Hillary Clinton Campaign, the DNC or any Political Law Group client,” the firm said in a statement.