President Donald Trump continued his offensive on Democrat congresswoman Maxine Waters, branding her the “unhinged face of the Democrat party.” Trump’s tweet comes after Waters called for the public harassment of Trump staff.

“Congratulations to Maxine Waters, whose crazy rants have made her, together with Nancy Pelosi, the unhinged FACE of the Democrat Party,” the President tweeted on Wednesday.

“Together, they will Make America Weak Again! But have no fear, America is now stronger than ever before, and I’m not going anywhere!”

Congratulations to Maxine Waters, whose crazy rants have made her, together with Nancy Pelosi, the unhinged FACE of the Democrat Party. Together, they will Make America Weak Again! But have no fear, America is now stronger than ever before, and I’m not going anywhere!

Congresswoman Maxine Waters, an extraordinarily low IQ person, has become, together with Nancy Pelosi, the Face of the Democrat Party. She has just called for harm to supporters, of which there are many, of the Make America Great Again movement. Be careful what you wish for Max!

Trump’s tweets come in response to Waters urging her progressive supporters to harass Trump administration staff in public. After Press Secretary Sarah Sanders was booted out of a Virginia restaurant for her politics over the weekend, Waters turned up the trash talk when she addressed a crowd on Sunday.

“If you see anybody from that Cabinet in a restaurant, in a department store, at a gasoline station, you get out and you create a crowd and you push back on them, and you tell them they’re not welcome anymore, anywhere,” said Waters, a committed anti-Trumper who has called for the President’s impeachment dozens of times. 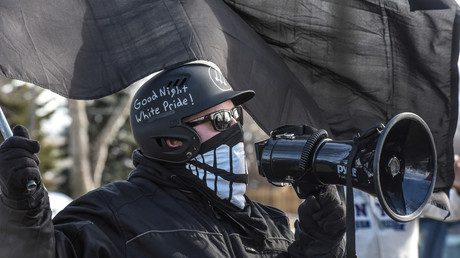 The political left has ramped up its pressure campaign against the Trump administration, after images of illegal immigrant children held in detention centers threw the president’s immigration policy into the national spotlight. Trump signed an executive order ending the separation and detention of the migrant children last week, but the left continues to ratchet up its increasingly aggressive resistance.

Senate Majority leader Mitch McConnell and his wife, Department of Transportation Secretary Elaine Chao, were heckled by protesters as they left an event at Georgetown University in Washington DC on Tuesday. Last weekend also saw chanting protesters camped outside Homeland Security Secretary Kirstjen Nielsen’s house and Florida Attorney General Pam Bondi screamed at and spat on by a mob as she tried to attend a movie in Tampa.

As the political divide widens, Press Secretary Sanders is expected to receive Secret Service protection from this week onwards.

Republicans have capitalized on the left’s political violence in the runup to this year’s midterm elections. In a new campaign video released by the party on Tuesday, images of burning cars and black-clad Antifa protesters are accompanied by clips of celebrities calling for Trump’s assassination, and progressive icon Bernie Sanders calling for “radical and extremist” ideas to become mainstream.