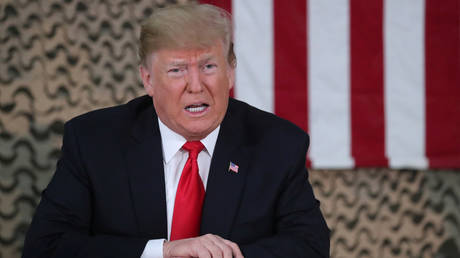 US President Donald Trump has doubled down on fiery rhetoric aimed at his political opponents, threatening to close the entire southern border of the US if the government shutdown continues.

“We will be forced to close the Southern Border entirely if the Obstructionist Democrats do not give us the money to finish the Wall & also change the ridiculous immigration laws that our Country is saddled with,” Trump tweeted in the early hours of Friday morning.

Hard to believe there was a Congress & President who would approve!

At the current rate, the partial US government shutdown will likely continue into 2019 as Democrats dig in amid an impasse over funding for Trump’s controversial border wall.


Trump added that the US loses “over 75 billion dollars” per year in trade with Mexico under the NAFTA agreement. So egregious is the disparity on trade that Trump claimed he would view the border closure as a “profit making operation.”

He also bemoaned the loss of US car manufacturing jobs to Mexico and advocated returning to pre-NAFTA trade arrangements.

….The United States looses soooo much money on Trade with Mexico under NAFTA, over 75 Billion Dollars a year (not including Drug Money which would be many times that amount), that I would consider closing the Southern Border a “profit making operation.” We build a Wall or…..

…..close the Southern Border. Bring our car industry back into the United States where it belongs. Go back to pre-NAFTA, before so many of our companies and jobs were so foolishly sent to Mexico. Either we build (finish) the Wall or we close the Border……

While both chambers of congress met briefly on Thursday, no steps were taken to end the partial shutdown, though many lawmakers didn’t bother to show for the meetings. Both the House and Senate are scheduled to reconvene Monday.

The dispute has left hundreds of thousands of federal employees in the dark about when they will be paid, with many placed on temporary unpaid leave.

The impasse follows Democratic party victories in the midterm elections after which they will retake the House of Representatives in January.

This is likely to prevent the release of the estimated $5 billion in funding Trump claims will be needed for the initial phase of construction of the now infamous wall, which has become a hallmark of his presidency.

His political opponents claim he is holding the government hostage over a vanity project that will achieve almost nothing towards its stated aim while pandering to unnamed “right-wing radio and TV hosts.”

No end in sight to the President’s government shutdown. He’s taken our government hostage over his outrageous demand for a $5 billion border wall that would be both wasteful and ineffective.

Instead of bringing certainty into people’s lives, he’s continuing the #TrumpShutdown just to please right-wing radio and TV hosts.