President Donald Trump told reporters on Friday that a date and location have been set for his historic meeting with North Korean leader Kim Jong-un. The president said that details would be announced soon.

While no date had been revealed before Friday, the White House previously said that a meeting between the two leaders could take place later this month, provided North Korea made certain concessions.

Speaking to reporters before boarding Marine One at the White House on Friday, Trump said that “a lot of things have happened” in negotiations to free Americans who are currently held in captivity in North Korea, which was a sticking point in negotiations.

Trump also said that withdrawing US troops from South Korea is “not on the table.” Some 28,000 US troops are currently stationed in South Korea, and their continued presence on the Korean peninsula is likely to be discussed during the Trump/Kim meeting, according to US Secretary of Defense, James Mattis. 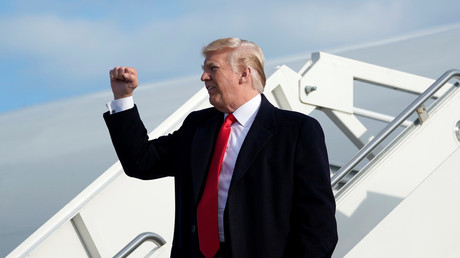 In the runup to the meeting, Kim has said that he intends to follow through with the abandonment of his nuclear weapons program. Speaking to Chinese Foreign Minister Wang Yi this week, Kim said: “The denuclearization of the Korean peninsula is the firm position of the North Korean side.”

Kim Jong Un and South Korean President Moon Jae-In met late last month, and pledged to end the Korean War, currently in a state of ceasefire since 1953. The bilateral summit was the first such meeting between leaders of the two countries in over a decade, and the first time a North Korean leader crossed the heavily militarized border into South Korean territory since the 1953 armistice.

The two leaders pledged to ease military tension, turn the fortified border into a “peace zone,” and pursue multilateral talks with other states like the US and China. “There will be no more war on the Korean peninsula, and a new age of peace has opened,” read the leaders’ joint statement.

Following the peace statement, South Korean troops began dismantling loudspeakers used to blast propaganda messages and Kpop music across the Demilitarized Zone (DMZ) and into North Korea. Kim promised to close his country’s nuclear test site, and both leaders announced that they would standardize their countries’ time zones this month.

After a year of saber-rattling, name-calling and “nuclear button” threats between the two leaders, plans for a meeting between Trump and Kim began to seriously take shape last month. US Secretary of State Mike Pompeo travelled to Pyongyang for a secret meeting with Kim, the highest level of contact between the US and North Korea since Kim’s father and predecessor Kim Jong-Il met with State Secretary Madeline Albright in 2000.

A meeting between Trump and Kim would be the first between a North Korean leader and a sitting US president.