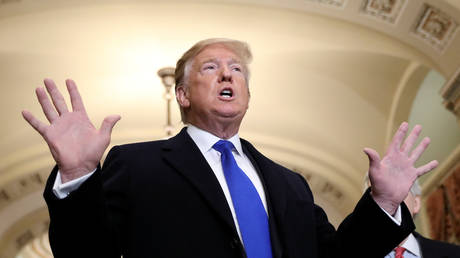 President Donald Trump has boasted that tech giant Google is “totally committed to the US Military, not the Chinese Military” after meeting with CEO Sundar Pichai.

“Just met with @SundarPichai, President of @Google, who is obviously doing quite well. He stated strongly that he is totally committed to the U.S. Military, not the Chinese Military,” Trump tweeted on Wednesday. The president also added that him and Pichai discussed “political fairness,” often a bone of contention between the tech firm and conservatives.

Just met with @SundarPichai, President of @Google, who is obviously doing quite well. He stated strongly that he is totally committed to the U.S. Military, not the Chinese Military….

Trump’s softened tone towards Google comes less than two weeks after he accused the Silicon Valley company of “helping China and their military,” a concern shared by Marine General Joseph Dunford, chairman of the Joint Chiefs of Staff, a few days beforehand.

“The work that Google is doing in China is indirectly benefiting the Chinese military,” Dunford said during a Senate Armed Services Committee hearing.

Google opened an artificial intelligence lab in Beijing in 2017, raising suspicions in Washington. The search giant insisted, however, that its Beijing operation will focus on non-military applications of the technology.


Google has also faced intense criticism for developing a censored search engine for the Chinese market, codenamed ‘Project Dragonfly.’ Although Pichai told Congress in December that his company was not working on Project Dragonfly “right now,” The Intercept reported on Wednesday that Google is holding a secret ‘performance review’ of the project, and reported earlier this month that the project may still be in development.

Despite growing concern over Google’s Chinese operations, the company has shown a willingness to help the US military before. The firm was contracted in 2017 to create an AI program to analyze video footage from drones using machine learning, a project codenamed ‘Project Maven’ by the Pentagon. However, Google decided not to renew the contract last year, after receiving backlash from its employees.


Meanwhile, the Pentagon has reached out to the tech industry for a helping hand in developing AI technology to keep the pace with Russia and China. In its first ever AI strategy, published last month, the Department of Defense vowed to “enhance partnerships with US industry to align civilian AI leadership with defense challenges.”

Microsoft and Amazon have both lent their AI and cloud computing services to the US military already.

With the fight for AI dominance shaping up to be the next great arms race, some watchdogs have sounded the alarm, warning that delegating the authority to kill to unfeeling automatons could have disastrous consequences for humanity.

“Bold action is needed before technology races ahead and it’s too late to preemptively ban weapons systems that would make life and death decisions on the battlefield,” Steve Goose, arms division director at Human Rights Watch, and co-founder of the Campaign to Stop Killer Robots, cautioned.