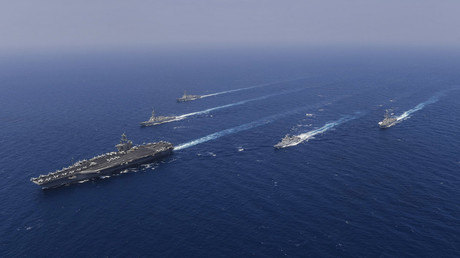 Addressing the graduating class of the US Naval Academy, President Donald Trump went big on nationalism and military prowess. At one point he talked about “dominating the oceans,” because, of course, the US is “surrounded by sea.”

“America is the greatest fighting force for peace, justice, and freedom in the history of the world,” Trump told the midshipmen in Annapolis, Maryland. “We are not going to apologize for America. We are going to stand up for America. No more apologies.”

Repeating the claim that the US has the lowest number of ships since 1917, Trump promised a naval expansion of the current 280-or-so fleet to “355 beautiful ships.” What would all those ships do? He was happy to explain, in typical Trump fashion.

All across Twitter, Trump’s critics cried out in outrage, declaring his words were anything from “idiocracy” to a plan for environmental disaster.

if by “dominate” he means utterly destroy, then we’re checking that box.

He wants to dominate the ocean so he can kill all of the sharks!! Wake up sheeple!!

We will always dominate the oceans with our microplastic waste.

“We must dominate the sea. We must always dominate the oceans.”
[sigh]
How does one even respond to this … idiocracy?