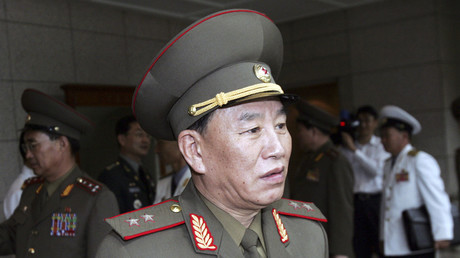 Kim Yong-chol, the vice-leader of North Korea and the former head of the country’s intelligence agency, is on his way to the US for talks to arrange the upcoming meeting between President Donald Trump and Kim Jong-un.

Trump has confirmed earlier reports of Kim Yong-chol’s arrival in a tweet. “We have put a great team together for our talks with North Korea. Meetings are currently taking place concerning Summit, and more,” Trump tweeted.

Yonhap earlier reported the North Korean official was due to arrive in the US on Wednesday.The summit is currently scheduled for June 12 in Singapore.

We have put a great team together for our talks with North Korea. Meetings are currently taking place concerning Summit, and more. Kim Young Chol, the Vice Chairman of North Korea, heading now to New York. Solid response to my letter, thank you!

Kim Yong-chol, aged 72 or 73, is under personal sanctions by the US for his alleged role in attacks on South Korea and the 2014 hacking attack against Sony Pictures. During his time as head of the North Korean intelligence service, the Reconnaissance General Bureau (2009-2016), he was targeted for sanctions twice.

He currently heads the United Front Department, the North Korean office responsible for relations with the South. He was also picked to lead the North’s delegation at the 2018 Winter Olympics in Pyeongchang, where he watched the closing ceremony next to Trump’s daughter Ivanka. There was no interaction reported between the two at the time, though.

The upcoming summit between Trump and Kim Jong-un, the first meeting of a sitting US president and a North Korean leader, has been the subject of a fierce back-and-forth for weeks now. Initially scheduled to take place on June 12 in Singapore, Trump briefly called it off last Thursday over the North’s “tremendous anger and open hostility.”

Less than 24 hours later he said the meeting was back on the cards, seemingly having relented after Pyongyang stated commitment to sitting down with Washington “at any time, in any way” to achieve peace in the Korean Peninsula.