The US president insists he won’t halt the government shutdown until Congress provides funding for the Mexico wall, and also claims he has the support of many federal workers, who have been furloughed while the standoff continues.

“Many of those workers have said to me, communicated — stay out until you get the funding for the wall. These federal workers want the wall,” Trump told reporters in the White House on Christmas Day. “They understand what’s happening. They want border security.”

The shutdown formally began on Saturday, after Trump refused to sign a budget approved by the House because it failed to include a provision for the $5.7 billion necessary for substantive work to begin on the president’s signature project. 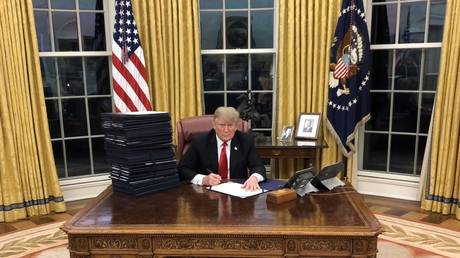 Despite surveys revealing that the measure is unpopular, and with the majority of respondents blaming Trump for the brinkmanship, the US president has stuck to his guns.

“I can’t tell you when the government is going to reopen,” he said. “I can tell you it’s not going to be open until we have a wall, a fence, whatever they’d like to call it. I’ll call it whatever they want. But it’s all the same thing. It’s a barrier from people pouring into our country.”

800,000 of 2.1 million federal employees have been affected, with nine of 15 government departments being officially de-funded. Workers are not paid in full while on leave, though are customarily compensated with backdated pay once the shutdown is over.

Despite Trump’s assertions, a survey by the National Treasury Employees Union of 1,500 of its members found that 85 percent were not happy with the shutdown, while the head of the union called this, the second shutdown in less than a year, a “travesty.”


The shutdown will last at least until the next time Congress meets –on Thursday– but neither side has conceded ground, and Democrat leaders in both chambers have said that they will not allow Trump’s wall to be built under any circumstances.