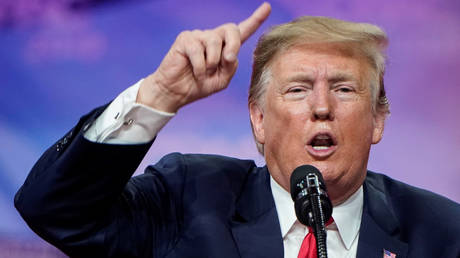 US President Donald Trump delivered a speech to conservatives that was short on ‘presidential’ ceremony and long on the jokes and one-liners that fired up his base in 2016. Here’re some highlights.

Speaking to conservatives at the 2019 CPAC conference, Trump dived straight into comedy, jibing the media for always taking his statements at face value. The president said he was speaking sarcastically when he said he hoped Russian hackers could find Hillary Clinton’s missing emails on the campaign trail in 2016.

“I’ve learned, because with the fake news, if you tell a joke, if you’re sarcastic, if you’re having fun with the audience…” he said, “If you say something like ‘Russia, please if you can, get us Hillary Clinton’s emails, please, Russia, please, please get us the emails.”

Trump goads the crowd into booing “the fake news,” then suggests he was just being sarcastic when he called for Russian hackers to go after Hillary Clinton’s emails during a 2016 news conference.

The crowd responds with “lock her up!” chants pic.twitter.com/kuCu61UgMr

“They’ll just say ‘isn’t that terrible,’” he continued. “These people are sick. They know the game and they play it dirty, dirtier than it’s ever been played.”

‘They try to take you out with bulls**t’

“Unfortunately you put the wrong people in a couple of positions, and they leave people for a long time that should not be there. All of a sudden, they are trying to take you out with bulls**t,” he said, drawing cheers from the crowd.

Sessions southern drawl wasn’t the only accent lampooned by Trump. The President mocked a long-time friend for his newfound formality on the phone.

Trump gets behind Green New Deal… sort of

Trump referred to the Green New Deal – an ambitious piece of environmental legislation that would do away with fossil fuels entirely and calls for radical wealth redistribution in America – as “a high school term paper written by a poor student.”

Still, the deal is already a valuable foil for Trump, allowing him to call those supporting it “maniacs,” “lunatics,” and a “socialist takeover.”

“This is the new Democrat platform, and I don’t want to talk them out of it,” Trump said. “I want them to embrace this plan. I just wanna be the Republican who runs against this plan.”

The president repeatedly bashed the Green New Deal throughout his speech, and at one point singled out two of its most vocal proponents; 2020 challenger Sen. Bernie Sanders and freshman New York Congresswoman Alexandria Ocasio-Cortez.

“It’s the craziest plan, yet I see Senators with white hair [Sanders] standing behind this young woman [AOC] and she’s ranting and raving like a lunatic,” Trump jabbed.

President Donald Trump unloads on “ranting and raving” “lunatic” Alexandria Ocasio-Cortez as he highlights the radical nature of her Green New Deal pic.twitter.com/6b1GcWQvET

The president was speaking at the Conservative Political Action Conference in National Harbor, Maryland. The annual four-day event brings together conservative politicians, activists and pundits from the right of center. Speakers this year have so far bashed socialism, slammed radical environmentalism, ridiculed the Democrats’ 2020 candidates, and hawked pro-Trump merchandise.

The crowd lapped up the president’s two-hour speech, with each one-liner punctuated with applause, cheers, and chants of “USA, USA,” “Build the wall,” and “Lock her up.”