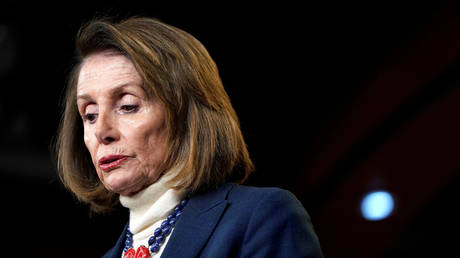 “Due to the Shutdown, I am sorry to inform you that your trip to Brussels, Egypt and Afghanistan has been postponed,” Trump wrote in a letter to Pelosi, shared with the press. “We will reschedule this seven-day excursion when the Shutdown is over.”

“Of course, if you would like to make your journey by flying commercial, that would certainly be your prerogative,” the president jibed.

Pelosi’s flight was due to depart at 3pm, while the White House circulated the letter around 2pm, according to Fox News.

Several congressional Democrats were apparently already on a US Air Force bus headed for Joint Base Andrews outside Washington when the letter was made public. The bus turned around and dropped them off back at the Capitol.

The bus full of congressional Democrats had already *LEFT* the Capitol on its way to a military jet to fly to Europe.

They were *en route* when they heard that Trump had canceled their trip.

Bus forced to turn around.

In the letter, Trump also threw shade at Pelosi for refusing to fund his planned wall at the US-Mexican border, which caused the current shutdown 27 days ago.

“I look forward to seeing you soon and even more forward to watching our open and dangerous Southern Border finally receive the attention, funding, and security it so desperately deserves,” the letter concludes.

Trump’s letter comes one day after Pelosi threatened to use her power of invitation as House Speaker to cancel Trump’s upcoming State of the Union address, citing concerns that security staff are furloughed due to the shutdown.

The Department of Homeland Security and Secret Service insists they have the manpower to staff the event, which one official called a “no-fail mission.”