Donald Trump has suggested that some migrants “grabbed” random children to better their asylum claim chances, when commenting on the recent tear gas attacks by US agents at the Mexican border.

Questioning why parents were “running up into an area” with children “where they know the tear gas is forming,” Trump then made his suggestion that those with children were just opportunistic “grabbers.”

“In some cases, you know, they’re not the parents,” the US president told reporters ahead of a rally in Mississippi on Monday night.


“These are people, they call ’em grabbers,” Trump continued. “They grab a child because they think they’ll have a certain status by having a child.”

Earlier in the day, Trump had defended the use of CS gas by border agents insisting that “we don’t use it on children.”

However, when challenged by media in Mississippi that children were in fact caught up in the incident, Trump backtracked describing the gas as a “very minor form” and “very safe.” 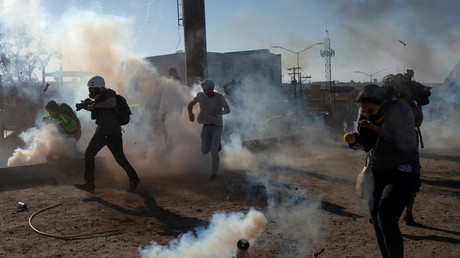 Tensions have been growing on the US’ southwest border with Mexico in recent weeks as over 7,000 migrants from Central America gathered at the border in a bid to cross over to the US.

On Sunday, a group of nearly 1,000 migrants, dramatically attempted to storm the border fence, near Tijuana, Mexico, following the temporary closure of the Southern California border crossing.

Chaos ensued as US border agents fired volleys of tear gas to disperse the crowd after migrants attempted to scale the fence while others tried tearing holes through it.

McAleenan added that 69 people were apprehended entering the US illegally during the scramble, and that no successful illegal entries had been made.

This was reiterated by the White House, who in a flurry of tweets commended how the “officers professionally managed” the situation acting in accordance with “standard protocol.”

Four agents were struck by projectiles. Officers responsible for securing the border responded with nonlethal deployments to disperse the crowd—standard protocol for law enforcement agencies across the country.

Mexico, however, have demanded a “full investigation” into the incident, which they say involved US CBP agents firing non-lethal weapons into Mexican territory.

Despite widespread condemnation from Democrats and activists at the use of CS gas on the migrants, Trump insisted that if violence continued at the border, the crossing could simply be closed.