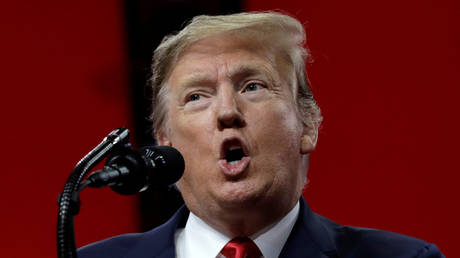 President Donald Trump has dismissed a Democrat-spearheaded probe for possible abuses by his administration as a “fishing expedition desperately in search of a crime,” in a barrage of tweets.

He branded the decision by the House Judiciary Committee to look into possible obstruction of justice, corruption and abuse of power by the White House as “the greatest overreach” in American history and said the Democrats behind it are the ones committing the actual crime.

The greatest overreach in the history of our Country. The Dems are obstructing justice and will not get anything done. A big, fat, fishing expedition desperately in search of a crime, when in fact the real crime is what the Dems are doing, and have done!

Committee chairman Rep. Jerrold Nadler earlier said it requested documents from 81 individuals connected to Trump in this apparent new quest for something impeachable. The probe was launched amid expectations in the US that the long-awaited report by Special Counsel Robert Mueller, who was tasked with investigating rumors of the Trump campaign’s collusion with Russia, would come out without serious evidence against the president.

Now that they realize the only Collusion with Russia was done by Crooked Hillary Clinton & the Democrats, Nadler, Schiff and the Dem heads of the Committees have gone stone cold CRAZY. 81 letter sent to innocent people to harass them. They won’t get ANYTHING done for our Country!

In another all-capitals tweet, Trump said the probe was “presidential harassment!”