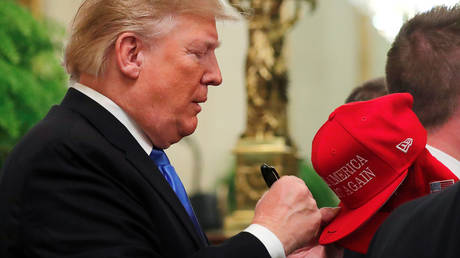 US President Donald Trump has finally commented on the controversy over a standoff between Catholic students and a Native American activist, which turned out to be not what the liberal media rushed to report.

The president, who was earlier criticized by people in the conservative camp for staying silent on arguably the biggest political story of the last weekend in America, voiced his support for a group of youths, who had been branded racists and spoilt rich kids last week. The group was “treated unfairly with early judgements proving out to be false” and “smeared by media,” Trump tweeted.

Looking like Nick Sandman & Covington Catholic students were treated unfairly with early judgements proving out to be false – smeared by media. Not good, but making big comeback! “New footage shows that media was wrong about teen’s encounter with Native American” @TuckerCarlson

The standoff between boys from the Covington Catholic High School in Kentucky and a Native American elder and Vietnam veteran outside the Lincoln Memorial in Washington DC grabbed the attention of the national media last weekend. A viral video of the encounter showed a smiling student named Nick Sandmann watching the elder, Nathan Phillips, beating a hand drum, surrounded by other students wearing “Make America Great Again” hats. The footage gave impression that the pro-Trump youths were harassing the lone activist, and that is how the story was reported by many outlets on Saturday.

The coverage proved to be inaccurate after more footage of the event emerged. The students didn’t mob Phillips – on the contrary, he approached their group as they were rallying against abortion. There was also another small group of activists nearby, identified as Black Hebrew Israelites, who insulted and harassed the Catholic students.


The turnabout did not happen on its own, it emerged on Monday. A Louisville public relations firm called RunSwitch PR was hired by parents of the Covington boys to respond to the outcry and helped the families with their public statements and media appearances. Of course, some people see the involvement as evidence that the students are still just as bad as initially portrayed by the media, and that their parents basically bailed them out of trouble.

No, looks like Nick Sandmann comes from a rich family who hired a PR team to gaslight us through a bunch of journalists and news organizations. Additional footage shows that the Covington Catholic High School students were taunting Nathan Phillips and making tomahawk gestures

The scandal is the latest sign of political polarization in America, in which media outlets play a crucial part. Critics say that the media is failing in its primary role of informing the public about facts, and is instead taking a partisan approach to news and profiting from ignorant outrage.