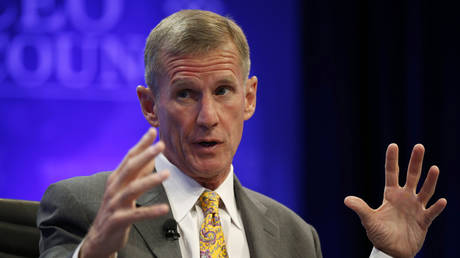 US President Donald Trump has hit back at retired General Stanley McChrystal, who he said was known for his “big, dumb mouth” after the former army commander criticized his Syria policy and called him immoral.

In a Tuesday tweet, Trump lashed out at McChrystal, the former commander of US forces in Afghanistan, branding him a “Hillary lover” and saying he was “fired like a dog” — a reference to the fact that he was fired by former president Barack Obama in 2010 after he made critical comments of top officials which were published in Rolling Stone.

McChrystal’s last assignment was a “total bust,” Trump wrote, alluding to the fact that Obama fired him in an effort to encourage more “unity” in the administration’s Afghanistan strategy.

Trump’s tweet came days after McChrystal said during an appearance on ABC’s “This Week” that he would not work for the Trump administration because the president was dishonest. “It’s important for me to work for people who I think are basically honest, who tell the truth as best they know it,” McChrystal said, adding that he doesn’t think Trump “tells the truth.” Trump has faced criticism from multiple top military officials in recent weeks over his decision to withdraw US troops from Syria.

Trump has frequently taken to Twitter to level no-holds-barred criticism against former (or sometimes soon-to-be-former) officials. He also seems to be a fan of comparing those in his bad books to dogs, having used the phrase “fired like a dog,”“dropped like a dog” and “dumped like a dog” multiples times in recent years.

In early December, Trump slammed former Secretary of State Rex Tillerson as “dumb as a rock” and “lazy as hell” in a similarly undiplomatic tweet. The retaliation came after Tillerson complained in an interview with CBS that he found it difficult to work with Trump who is “undisciplined” and “doesn’t like to read.”