The tax and trade policies of Donald Trump are, in fact, what have contributed to the surge in oil prices, a US economics professor told RT, adding that the US President’s tough words to OPEC are a political stunt.

On Thursday, Trump accused OPEC’s Middle East producers of “pushing for higher and higher oil prices” and demanded “they stop it,” adding that the US is “protecting those countries.” Oil prices showed a mixed reaction to Trump’s words. The Brent benchmark fell 43 cents to $78.97 per barrel, while the US Texas Intermediate grew by 9 cents to $71.21.

We protect the countries of the Middle East, they would not be safe for very long without us, and yet they continue to push for higher and higher oil prices! We will remember. The OPEC monopoly must get prices down now!

OPEC does, in fact, control oil supply to a significant extent but that does not necessarily mean that it is also in full control of the oil prices, Jack Rasmus, a professor of Political Economy at St. Mary’s College of California, told RT, adding that the policies pursued by the US president himself play a much bigger role in what happens to oil and gasoline prices in the US. 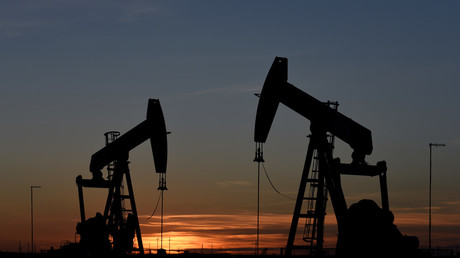 “The US economy is overstimulated by the Trump $4 trillion tax cuts for investors and businesses,” Rasmus explained, adding that the rising inflation is one of the primary factors contributing to the oil price surge. Apart from that, Trump’s trade war with China and even with the US allies in the West also drives up the prices, as businesses also have to raise them to adapt to the tariffs that both the US and its trading partners have imposed recently.

Trump’s sanctions war on Iran also does not make the situation any better. The US sanctions, which are aimed at bringing Iran’s oil exports to “zero,” led to a decrease in Iran’s oil sales, thus cutting the supply and driving the prices up. As if it was not enough, Trump’s rhetoric only adds fuel to the fire, according to Rasmus.

“When Trump accuses Iran publicly, it gives the global oil speculators a reason to drive up the price,” he told RT, adding that it is the “global speculators that are driving the short-term oil prices.” “There is a connection between the speculators and Trump policies. When he makes those statements, it certainly does contribute to the oil prices rise,” the analyst explained.

This rhetoric was more about winning voters’ support ahead of the November mid-term elections than about really remedying the situation in the oil market, Rasmus says. “He is whipping up his domestic base,” the analyst said, adding that “Trump [is] trying to blame foreigners of all kinds for economic situation in the US.”

Trump got elected on a platform of economic nationalism in particular, Rasmus said, adding that the president now sticks to that narrative and blames foreigners –be they immigrants or some foreign competitors– for the US’ woes. However, this is “another factual misrepresentation,” the analyst said.

As oil prices remain high, prices for gasoline in the US are growing. The average cost of gasoline has risen 60 percent from $1.87 per gallon in February 2016 to over $3 in September.