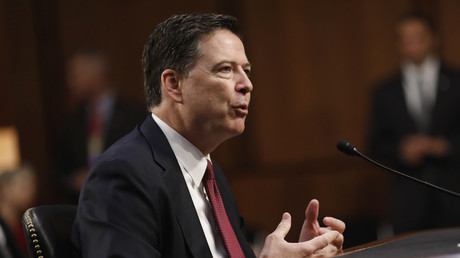 US President Donald Trump branded ex-FBI executives James Comey and Andrew McCabe as “clowns and losers” in a tweet criticizing them and other officials for ruining the once “stellar reputation” of the FBI.

“Will the FBI ever recover its once stellar reputation?” he asked while calling out Comey and McCabe, along with former FBI agent Peter Strzok and “his lover, the lovely Lisa Page” – a former FBI lawyer.

Trump claimed that they along with other dismissed top officials tarnished the name of the FBI. “So many of the great men and women of the FBI have been hurt by these clowns and losers!”

…..Will the FBI ever recover it’s once stellar reputation, so badly damaged by Comey, McCabe, Peter S and his lover, the lovely Lisa Page, and other top officials now dismissed or fired? So many of the great men and women of the FBI have been hurt by these clowns and losers!

The tweet followed on from an earlier post questioning why the FBI hadn’t handed over former Deputy Director of the FBI Andrew McCabe’s text messages to Judicial Watch – a conservative watchdog seeking the records.

Trump suggested that the FBI was hiding something and threatened to get involved in Judicial Watch’s fight to access McCabe’s messages related to his wife Jill’s 2015 Virginia state senate campaign.

Why isn’t the FBI giving Andrew McCabe text messages to Judicial Watch or appropriate governmental authorities. FBI said they won’t give up even one (I may have to get involved, DO NOT DESTROY). What are they hiding? McCabe wife took big campaign dollars from Hillary people…..

The Wall Street Journal reported in 2016 that an influential Democrat with longstanding ties to Bill and Hillary Clinton, Virginia Governor Terry McAuliffe, donated nearly half a million dollars to Jill McCabe’s election campaign through his political organization.

McCabe responded to the claims in The Washington Post, claiming her husband’s involvement in the Clinton probe came after the race was over.

Anti-Trump text messages exchanged between Strzok and Page also frequently mention “Andy” – believed to be a reference to McCabe.

“I want to believe the path you threw out for consideration in Andy’s office — that there’s no way he gets elected — but I’m afraid we can’t take that risk,” Strzok told Page in one message. “It’s like an insurance policy in the unlikely event you die before you’re 40.”

Trump previously claimed the texts amounted to “treason” and had exposed an FBI plot against him. The president has come under fire for his frequent criticism of the intelligence agency, with former director James Comey and former Attorney General Loretta Lynch among those taking him to task for his attacks.