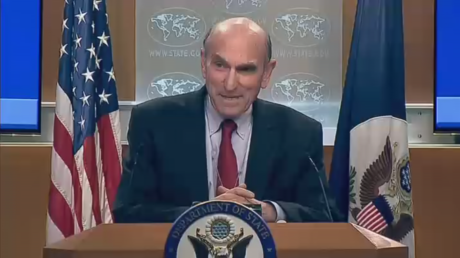 Washington seems so dead-set on regime change in Venezuela, the State Department has just appointed a former diplomat with a sordid track record in Latin America and Middle East to spearhead “restoring democracy” in Caracas.

US Secretary of State Mike Pompeo announced on Friday the appointment of Elliott Abrams to “help the Venezuelan people fully restore democracy and prosperity to their country.” Abrams is expected to coordinate all diplomatic efforts to replace President Nicolas Maduro with the self-proclaimed president Juan Guaido, recognized by the US, OAS and several EU members.

“I left this building 30 years ago this week – last time I worked here – so it’s very nice to be back,” Abrams told reporters at the State Department on Friday. “This crisis in Venezuela is deep and difficult and dangerous and I can’t wait to get to work on it.”

The appointment is an attempt by the US to introduce a direct control of Venezuela as a “future regional vassal,” Russian Foreign Ministry spokeswoman Maria Zakharova said.

Democracy was ‘restored’ in Iraq. In Libya, too. In Syria they tried but failed, or rather weren’t allowed to. And now in Venezuela

Many US journalists and observers – even those supportive of regime change in Venezuela such as MSNBC’s Chris Hayes – were appalled by the news as well, recalling the former diplomat’s dark history in Latin America.

Abrams is notorious for his central role in the Iran-Contra scandal, and oversaw US regime-change wars in Nicaragua and El Salvadorhttps://t.co/VSAv6odA1J

Still think this is about democracy & human rights?

As the Reagan administration’s assistant secretary of state for human rights in the 1980s, Abrams supported the US-backed dictators in Guatemala, El Salvador and Honduras in their campaigns of repression, including death squads. He was also involved in working with Iran to arming the US-backed rebels in Nicaragua, the infamous Iran-Contra scandal.

Abrams was eventually convicted of lying to Congress about Iran-Contra, but was pardoned right away by President George H.W. Bush. In the 1990s, Abrams became a founding member of the Project for a New American Century, a hawkish neoconservative think-tank.

During the 1980s, the Salvadoran government slaughtered perhaps 70,000 people in.ways so ghastly there’s no contemporary equivalent, except maybe for ISIS. Elliott Abrams was a key figure making it happen. He later said he considered this to be a “fabulous achievement.” pic.twitter.com/WS0tv37rBv

He returned to the corridors of power in 2001, as a director on the National Security Council for President George W. Bush. He played a key role in the 2002 attempted coup in Venezuela against President Hugo Chavez, and was one of the architects of the 2003 Iraq war.

In February 2017, then-Secretary of State Rex Tillerson and Trump’s son-in-law and adviser Jared Kushner wanted to bring Abrams back to the State Department as deputy secretary, but Trump reportedly vetoed the proposal after reading what Abrams wrote about him during the 2016 presidential campaign, as part of the NeverTrump conservative camp.

Also on Friday, the US Treasury Department announced it would not be freezing all Venezuelan government assets, but instead ensure that “commercial transactions by the Venezuelan government, including those involving its state-owned enterprises and international reserves, are consistent” with Washington’s recognition of Guaido as the legitimate president.

Between the recognition, the Treasury announcement, and the appointment of Abrams, it seems that President Donald Trump has entirely abandoned his campaign plank of opposing regime change and nation-building interventions, embracing instead the neoconservative line championed then – and this week as well – by his rival Senator Marco Rubio (R-Florida).

The naming of Elliot Abrams as Special Envoy on Venezuela is great news. He is an tough & experienced foreign policy expert with a long history of supporting democracy, liberty & the national interest of the United States.