President Donald Trump has signed a memorandum that disqualifies transgender individuals with a history of “gender dysphoria” from military service “except under certain limited circumstances.”

Under the new policy, presumably developed “through extensive study by senior uniformed and civilian leaders, including combat veterans,” those individuals “who may require substantial medical treatment, including through medical drugs or surgery,” are deemed unfit for service, Trump’s memorandum states. 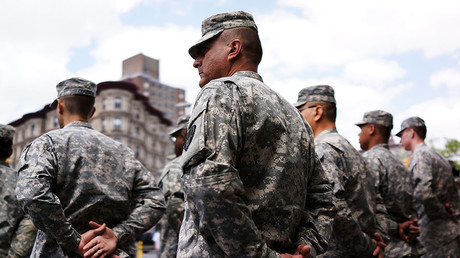 However, the secretaries of defense and homeland security “may exercise their authority to implement any appropriate policies concerning military service by transgender individuals,” the memo added, according to Reuters.

“The Secretary of Defense and the Secretary of Homeland Security have concluded that the accession or retention of individuals with a history or diagnosis of gender dysphoria… presents considerable risk to military effectiveness and lethality,” the White House said in a statement.

“This new policy will enable the military to apply well-established mental and physical health standards—including those regarding the use of medical drugs—equally to all individuals who want to join and fight for the best military force the world has ever seen,” it added.

Back in July, Trump criticized the late Obama-era policy on transgender troops, saying in a series of tweets that the US military would not foot bills for their sex reassignment surgeries. In August, he followed it up with a memo, banning transgenders from enlisting. The ban, however, has been blocked in several federal courts as potentially unconstitutional, and transgender recruits have been allowed to enlist since January this year. The new policy rescinded that controversial August directive, but still formally prevents most transgender people from serving.

….victory and cannot be burdened with the tremendous medical costs and disruption that transgender in the military would entail. Thank you

On Friday, the Pentagon reaffirmed that it would continue to comply with federal law and “will continue to assess and retain transgender service members.” In a February memorandum to the White House, Defense Secretary Jim Mattis reassured those currently serving that they could continue to serve if they had been diagnosed with gender dysphoria after Obama’s policy took effect.