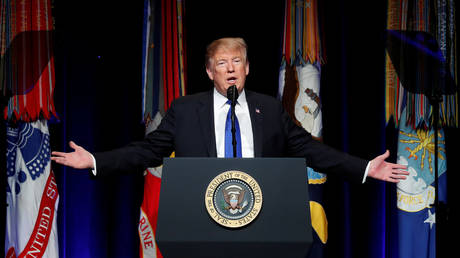 US President Donald Trump has announced plans for 20 new ground-based interceptors to be placed in Alaska which could “shield every city” in the country.

Speaking at the Pentagon on Thursday, Trump announced the details of a “Missile Defense Review” undertaken by his administration. The new report outlined “six major changes” in the US’s missile defense strategy, including the Alaska interceptors.

Trump said the goal is for the US to be able to “terminate any missile launches from hostile powers, or even from powers that make a mistake.”


“The world is changing — and we’re going to change much faster than the rest of the world, ” US president declared adding that the country could not  “simply build more of the same or make only incremental improvements.”

Trump also said that space would be recognized as the “new war-fighting domain” and that his previously promised ‘Spaceforce’ would be “leading the way.” His upcoming budget, he said, would invest in a “space-based missile defense layer.”

The president said that the US was a “good player” on the world stage, but that Washington could be “far worse than anybody else if need be.”

Also on rt.com
Trump says time to stop ‘ENDLESS WARS’: So why does sabre-rattling against Russia & China continue?


The review itself says that while an “avenue to peace” now exists with North Korea, the country still poses an “extraordinary threat” to the US.

China, Iran and Russia are also named in the document as “current and emerging missile threats to the American homeland.”