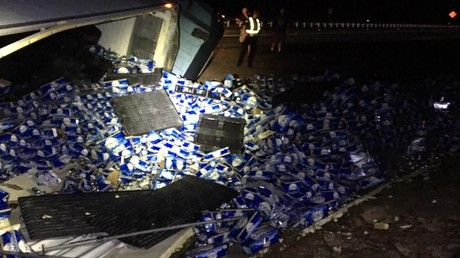 Happy hour hit the streets with a splash when a hapless truck driver spilled nearly 60,000 bottles of beer onto a Florida highway.  The l-10 highway was awash with Busch beer after a tractor-trailer dramatically overturned.

“Thankfully only minor injuries which were treated on scene but the beer didn’t fare so well,” the Okaloosa County Sheriff’s office wrote in a Facebook post on Wednesday.

It wasn’t all a barrel of laughs, as Nolan Powell was treated for minor injuries at the scene and is charged with careless driving.

Thanks to all of those who have reached out to comfort the Busch family in our time of need. A terrible tragedy. https://t.co/yZ3lmtyhrG

Less a lock-in for this driver, and more a lock-up…