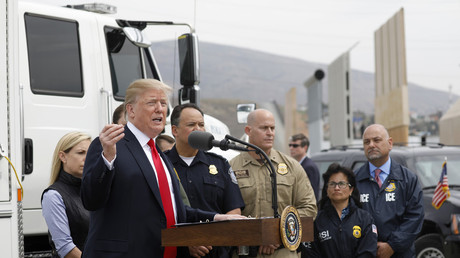 Trump announced the deployment of the National Guard along the border in early April as part of a crackdown on illegal border crossings from Mexico. Until Congress approves funding for the construction of the border wall, the US president said, the military will help police the frontier.

The governors of Texas, New Mexico and Arizona, all Republicans, have cooperated with the plan. Brown initially approved sending some 400 troops to the border, earning praise from Trump.

California Governor Jerry Brown is doing the right thing and sending the National Guard to the Border. Thank you Jerry, good move for the safety of our Country!

Brown’s proposal for the use of troops, however, excluded any activities that could be considered helping the US Border Patrol in immigration enforcement, AP reported Monday, citing anonymous “US officials with knowledge of the talks,” who were not authorized to discuss the matter.

As examples of tasks the governor was objecting to, AP listed vehicle repairs, operations of remotely controlled surveillance cameras, and clerical work such as payroll and fuel supply.

California National Guard spokesman Lieutenant-Colonel Thomas Keegan told AP on Monday that the state had not rejected the troop deployment. Brown sent the federal government a Memorandum of Agreement outlining the restrictions on the use of troops, and is waiting for a response, Keegan said.

Talks between federal and California officials “soured” on Friday and over the weekend, AP reported, after the federal officials were presented with Brown’s document outlining the restrictions on troop functions. The anonymous officials who spoke to AP described the restrictions as “onerous.”

The governor reportedly wanted to focus more on drug and firearms smuggling and fighting transnational criminal gangs, suggesting the use of about 40 troops for marijuana eradication across California.

#BREAKING: California has rejected the Trump administration’s initial plans for National Guard troops to the border because the work is considered too closely tied to immigration enforcement. -AP

Dominated by Democrats, the state has been at the forefront of opposing Trump’s immigration policies since the very beginning of the president’s term. In October 2017, the state legislature adopted a bill declaring California a “sanctuary state,” barring officials from cooperating with federal immigration enforcement. State Attorney General Xavier Becerra has threatened businesses who cooperate with the federal government with fines and imprisonment.

In response, Trump floated the idea of withdrawing all immigration enforcement from California, saying the state would “beg” to have them back after the resulting crime wave. Eventually, however, he decided on deploying the National Guard in areas where the US Border Patrol said it needed support due to lack of the border wall.

Several wall prototypes were built south of San Diego, California, but Congress did not approve much in the way of wall funding in the $1.3 trillion omnibus spending bill. Trump signed the bill to avoid a government shutdown, but his base was displeased by all the concessions to the opposition Democrats.

Trump campaigned on the platform of securing the border with Mexico and reforming the US immigration system. Last year, the White House proposed giving amnesty to 1.8 million immigrants in the US illegally in exchange for building the wall and abolishing “chain migration” and the diversity visa lottery. Democrats have denounced the proposal as “racist.”