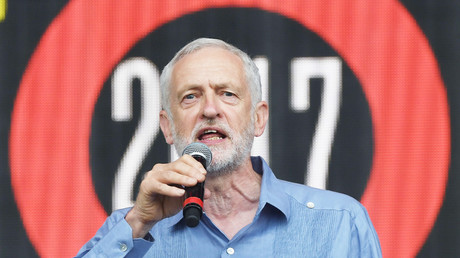 Labour leader Jeremy Corbyn took a swipe at US President Donald Trump as he blasted his policy of separating migrant children from their families as “immoral.” The Opposition leader branded the process as “shocking” in a tweet.

Up to 2,000 children are believed to have been separated from their parents as they tried to cross the US southern border illegally between mid-April and the end of May.

It’s tragic and shocking to see innocent children caged like animals at US migrant camps and to hear their cries of anguish after being forcibly separated from their parents.

It’s immoral and goes against fundamental human rights we must always respect, no matter the situation.

Trump has defended the ‘zero tolerance’ policy saying he does not want his country to become a “migrant camp”, while the practice has brought international condemnation from global leaders and human rights organizations.

Corbyn on Tuesday sent out an unreserved tweet saying: “It’s tragic and shocking to see innocent children caged like animals at US migrant camps and to hear their cries of anguish after being forcibly separated from their parents.

“It’s immoral and goes against fundamental human rights we must always respect, no matter the situation.”

At the time of publication the tweet had received some 12,000 likes, while it was retweeted 4,500 times.

In turn, Prime Minister Theresa May’s spokesperson pointedly noted that the UK immigration policy has a “very clear and humane” approach. Later on Tuesday, Downing Street stated: “We do not separate child refugees from their families.”

Condemnation has also come from the Scottish National Party leader Nicola Sturgeon tweeted: “This is horrifying,” as she linked to a report on what the UN has branded an “unacceptable” process.

SNP MP Ian Blackford tweeted: “Trump must be called out for this. This kind of behaviour must stop. It is not acceptable in a civilised society. Every person, every child must be treated with humanity.

“Trump demeans the office of President of the US. We must stand with these vulnerable children.”

The pictures of caged children, some as young as three, separated from their parents in Texas, are proof that Germany has NOTHING to learn from the US on immigration policy

Other popular commentators took to Twitter to point out the “abomination” responsible for such a “vile” practice will be coming to London in just under a month.

Donald Trump is separating children from their parents & locking them up in cages in camps. It’s an incomprehensible & vile act which every one us must condemn. The abomination responsible will be visiting the UK on 13th July. Join the protest & give him the welcome he deserves! pic.twitter.com/EKtX6rKHGg

Twitter users claimed the current political climate in the US is reminiscent of the 1930s, while others called on the visit by the Republican leader on July 13 to be cancelled until such “heinous” practice is stopped.

@theresa_may@Conservatives We should NOT be hosting a visit by a would-be dictator carrying out state-sponsored child abuse and kidnap of innocent children. Until this heinous, barbaric practice ends and every child is reunited, cancel Trump’s visit.

The policy is the brainchild of US Attorney General Jeff Sessions, who made headlines last week after reportedly citing the Bible to justify families being separated on immigration grounds.

“I would cite you to the Apostle Paul and his clear and wise command in Romans 13, to obey the laws of the government because God has ordained them for the purpose of order,” he said. “Orderly and lawful processes are good in themselves and protect the weak and lawful.”