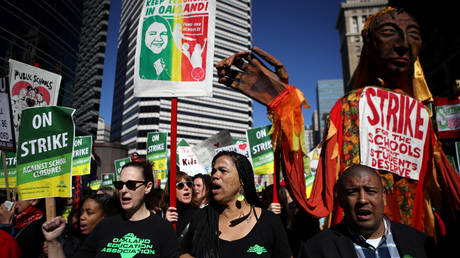 Work stoppages and strikes are on the rise across America, with teachers and social workers most commonly seen at the picket line. Have newly militant trade unions found a receptive audience in the Democratic party?

There were 20 major work stoppages in 2018, according to figures recently released by the Bureau of Labor Statistics. The number of stoppages was the highest since 2007 and involved the most workers (485,000) since 1986. Teachers, healthcare workers, and social workers made up a staggering 90 percent of all those on the picket lines.

The largest work stoppage of the year saw 81,000 teachers in Arizona put down the chalk and walk out of the classrooms, missing a combined 486,000 days of work. Similar walkouts in Oklahoma, West Virginia, Kentucky, Colorado and North Carolina all made the headlines last year.

The strikes are ongoing. 3,000 teachers in Oakland, California walked off the job last week, protesting budget cuts and stagnant wages.

“Today is a historic day in the city of Oakland,” Oakland Education Association President Keith Brown told a crowd of protesters last Friday. “Teachers, educators are united with parents and students – and we are demanding that we have the schools our students deserve.”

Aside from cuts to their schools, teachers are protesting their own wages. While Oakland pays teachers anywhere between $50,000 and $85,000 per year, rents in the tech-rich Bay Area have skyrocketed and can swallow 80 percent of a teacher’s salary, according to USA Today. Across the country, the story is the same. Adjusted for inflation, salaries have decreased in a majority of states since 1999, says the National Education Association, America’s largest labor union. Only a handful of states have seen sizable increases in salary, and in many coastal cities like Oakland, rent hikes have outstripped these gains.

Unions have been instrumental in organizing mass strikes against these conditions. While union membership across the workforce stood at 10 percent in 2018 – down from 20 percent in 1983, just under half of all teachers are unionized.

Thus far, strikes have proven an effective method of lobbying for change. No parent wants to see their child’s school shut its doors, and public anger can quickly make politicians cave to the teachers’ demands. Last year’s strike in Arizona ended after just six days, with Republican Gov. Doug Ducey signing a bill granting the teachers a 20 percent raise, as well as $371 million in school funding.

While the teachers had requested $1 billion in funding, the raise they got was considerably more than the $65 million and two percent pay raise Ducey promised them before the strike.

“We are all militant again, we will all go to jail if we have to,” union leader Robert Russo told an American Federation of Teachers convention in Pittsburgh last July. “They are taking away rights, they are taking away everything we have worked for years and people are very invigorated.”

The strikes come at a turning point of sorts in American society. Despite President Trump’s endless criticisms of socialism – which he said has brought “suffering, misery and decay” wherever it has been applied, more and more Americans are warming to the idea of socialist policies. A Gallup poll taken last year found that 57 percent of Democrats view socialism positively. Only 47 percent view capitalism positively, down from 56 percent in 2010. Regardless of political affiliation, half of all Americans aged between 18 and 29 view socialism positively.

Trade unions have long been bastions of support for the Democratic party, and that party has now moved left too. Politicians like Sen. Bernie Sanders (I-Vermont) and Rep. Alexandria Ocasio-Cortez (D-New York) have made a federally-mandated $15 ‘living wage’ a core part of their platforms. Sanders is a frontrunner for the Democratic presidential nomination in 2020, and a handful of his competitors have also embraced his ‘living wage’ proposal.

In Oakland, Rep. Barbara Lee (D) has come out in favor of the striking teachers, saying “they deserve a living wage and the tools they need to give our kids the very best education.” Rep. Ro Khanna (D) chimed in too, as did Sen. Kamala Harris, a favorite for the 2020 Democratic nomination.

Teachers have such an important job teaching our young people. They shouldn’t be forced to share rooms or live in crowded spaces because they can’t afford the cost of rent.

I stand with Oakland teachers who are on strike. #OaklandTeachersStrikehttps://t.co/9phNKmWbuQ

Oakland teachers are continuing to strike this week for better wages and smaller class sizes. We must all stand in solidarity with them as they fight for what they deserve, what they’re worth, and what’s best for our schools.

With the political climate more favorable to protest, and with some successes already recorded, the surge in strikes and stoppages last year could well become the new normal in a louder, more left-wing America.