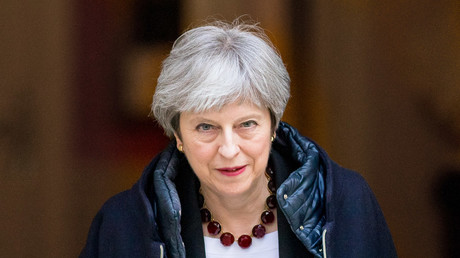 Theresa May cowed fellow Tories into backing a vote on her post-Brexit customs plan as she told them they would otherwise face a general election, which could ultimately catapult Jeremy Corbyn into Number 10, the Times reports.

In one of her most challenging days as a PM, the Tory leader on Thursday night just narrowly managed to scrape through a crunch parliamentary vote on her customs plan – which would see the UK leaving the EU customs union. An amendment by 12 Tory MPs which would have kept Britain within the union was defeated by 307-301 thanks to four Labour Brexiteers who sided with the government.

According to a source cited by the Times, Tory Deputy Chief Whip Chris Pincher told rebel MPs they would be responsible for a vote of no confidence if May’s plan was shot down. Under the Fixed-term Parliaments Act, two votes of no confidence in two weeks can trigger a general election.

“[Pincher] said they would pull the third reading of the [trade] bill and call a vote of confidence. He said we’d be responsible for a general election and putting Jeremy Corbyn in No 10. It was appalling behaviour. Totally disgraceful,” one rebel told the Times.

It comes as a YouGov poll reveals Labour has had the lead over the Tories ever since the Chequers cabinet meeting at the beginning of the month, where the PM put forward her much-contested post-Brexit trade plans.

READ MORE: ‘Afraid of their own MPs’: May seeks to shut down parliament early as Brexit tensions boil over

Labour’s lead has grown five points to 41 percent, followed by the Tories at 36, the Liberal Democrats at 9 and UKIP at 7, the survey commissioned by the Times reveals.
May’s alleged threatening of her fellow Tory MPs comes after the leader suffered a string of ministerial resignations, including Brexit Secretary David Davis and Foreign Secretary Boris Johnson, who quit over the Chequers agreement.

As the post-Brexit trade blueprint would see the UK abiding by EU rules in order to have a free trade deal, it stirred outcry among Brexiteers who claimed the deal would be akin to Britain remaining in the bloc.