Britain’s right-wing press and a number of political commentators have accused the BBC of deliberately selecting a left-leaning, “anti-Tory” audience for its live general election debate on Wednesday night.

The broadcaster was accused of picking one of the “most left-wing audiences” for the seven-way debate, which saw Tory Home Secretary Amber Rudd stand in for Prime Minister Theresa May.

The headline on the front of the Daily Mail on Thursday read ‘Fury at Bias on BBC TV Debate’.  As a source for the story, it used a tweet from George Eaton, the political editor of the left-leaning New Statesman, which read: “This feels like the most Left-wing audience in any TV debate.”

However, following the Mail’s front-page, Eaton said his comments should not have been taken as an allegation of bias, but a mere “observation.”

Among the Tory politicians who were far more open with their criticism was Foreign Secretary Boris Johnson.

“It was seven people speaking to probably the most left-wing studio audience the BBC has ever brought together,” Johnson said, according to the paper.

“This is deja vu. In 2015, I called out the BBC audience for being hard-Left-wing. It’s even worse this time,” he said, the right-wing tabloid reports. 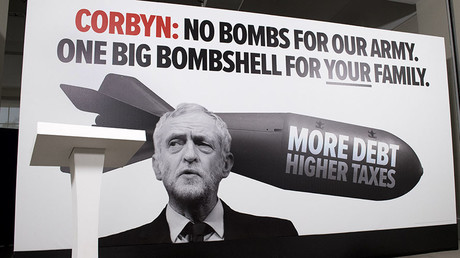 “You only have to watch Question Time to realize that the BBC’s idea of an impartial audience is 80 percent Labour supporters,” he said, according to the newspaper.

“This is what we have come to expect from political BBC programs,” Davies added.

“Obviously there are questions for the BBC to answer… It’s quite clear there was an anti-Tory bias in the audience, which wasn’t there in the Channel 4 program on Monday.”

The BBC has defended itself, saying the audience had been carefully vetted through a third party.

Its statement read: “The BBC commissioned polling company ComRes to recruit an audience that is representative of the country demographically and politically.

“They have lots of experience doing this. This covered age; gender; ethnicity; socioeconomic; party politics; how they voted in EU referendum; and some undecided.”