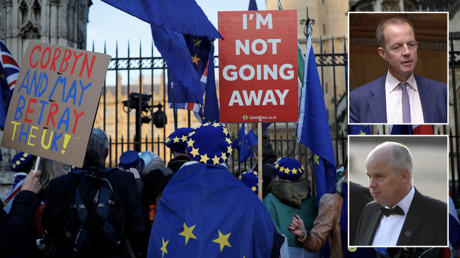 PM Theresa May’s key special adviser in her inner circle is a “hard Brexiter” who wants to “destroy” her plans to find a cross-party compromise on Brexit, claims a former Conservative MP who recently resigned from the party.

Nick Boles, who shocked fellow British lawmakers earlier this week by quitting the Tory Party in parliament after a series of indicative votes failed to break the Brexit impasse, made the accusations via Twitter.

In his tweets, which have gone viral, he slammed Robbie Gibb, the PM’s communications chief, arguing that it was time for the media to be honest about the former BBC editor’s views and motivations on Brexit. Boles urged May to tighten the leash on Gibb or else send him back to his previous employer.

…Gibb is a hard Brexiter who wants to destroy the PM’s new search for a cross-party compromise. The media should be honest about the briefings they receive from that quarter. And the prime minister would do well to tell Mr Gibb to get back in his box – or go back to the BBC.

The media should be honest about the briefings they receive from that quarter. And the Prime Minister would do well to tell Mr Gibb to get back in his box – or go back to the BBC.

Some on Twitter have alluded to the fact Gibb had previously been in charge of a number of the BBC’s political shows, suggesting that it [his alleged hard Brexiter position] “explains everything.”

Bloody Hell! He was head of BBC politics as well … this explains everything!

The same Robbie Gibb who was in charge of The Great Debate about The Referendum at Wembley Arena, as well as Newsnight, Andrew Marr Show, Daily Politics, Sunday Politics, This Week, Westminster Hour, basically promoting Nigel Farage from an unknown MEP to a superstar?
Him?

He was named as May’s communication director in July 2017. That means he was at the BBC before the referendum and for a whole year after, giving him plenty of time to influence the debate. It explains a lot.

Christopher Hope, Chief Political Correspondent and Assistant Editor at The Daily Telegraph, leapt to the defense of the ex-BBC man, insisting that it was unfair for Boles to make such accusations when he is unable to defend himself.

Steven Woolfe, the Independent MEP and former UKIP politician branded Boles “a remain extremist posing as a compromiser,” and claimed he was an “arrogant snob.”

Robbie can’t defend himself in the same way you can, Nick.

You truly are perverse to a. State the WA is #Brexit or b. It is hard Brexit. Like your customs union they are both a form of remain. You are a remain extremist posing as a compromiser. You are a sad charlatan, a measly mouthed opponent of democracy and an arrogant snob to boot

It comes after May and Labour leader Jeremy Corbyn opened talks over a compromise Brexit deal on Tuesday.

Corbyn on Wednesday said “constructive” talks and “exploratory discussions” had been held with May in the hopes of breaking the Brexit deadlock that has been plaguing the country for months. A spokesperson for Downing Street said both sides showed “flexibility” during the discussions.