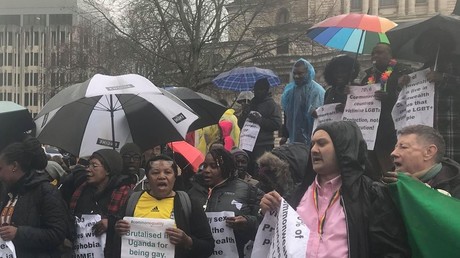 A Tory MEP’s Commonwealth Day tweet about members being “bound together by a dream of liberty” backfired on Monday. Daniel Hannan’s message celebrating the history of the union was labelled “ignorant.”

His tweet comes as the rich and famous descend on Westminster Abbey for a service to mark the annual Commonwealth Day with representatives from the group of nations born out of the British Empire. Hannan suggested the group was united by a common goal, rather than a history of colonization.

Happy Commonwealth Day to 2.5 billion people bound together by a dream of liberty. 🇮🇳🇵🇰🇳🇬🇧🇩🇿🇦🇹🇿🇰🇪🇨🇦🇺🇬🇲🇾🇬🇭🇲🇿🇦🇺🇨🇲🇱🇰🇲🇼🇿🇲🇷🇼🇵🇬🇸🇱🇸🇬🇳🇿🇯🇲🇳🇦🇧🇼🇱🇸🇹🇹🇲🇺

Another added: “Freedom is slavery and @DanielJHannan is proving that his ignorance is his strength.” Social media user Tyrell Elvin said: “Your ignorance is stunning.”

“2.5 billion people somehow falsely bound together by a history of invasion, ethnic cleansing, misplaced superiority and the fact that we still haven’t made amends to most of them,” another Twitter user said.

Happy “We plundered your countries and abused your people but desperately want a trade deal now” – Day!

Typical Hannan celebrating the invasion and theft of countless nations’ wealth and natural resources. Why would anyone want to celebrate the colonial project in this way?

The Queen, flanked by Prince Harry and new fiancee Meghan Markle, will address dignitaries from the territories of the former empire. But protesters have gathered in the rain to highlight human-rights abuses that have occurred in the Commonwealth.

A total of 37 of the 53 countries in the Commonwealth have kept archaic laws on homosexuality – meaning one billion people live under anti-gay rules.

Campaigners shouted for justice in London on the 41st Commonwealth Day, many of whom were from African nations. A group from South Cameroon marched for justice and an end to the mistreatment of their people by the French-dominant Cameroon.

English-speaking regions have endured punishment, mass rape and even murder, it was claimed. In 2017, curfews were placed on their people, their internet was cut for 93 days, leading to pockets of violence and families running for their lives.

Human-rights abuses in India were also lambasted on Twitter as the nation’s jails remain squalid and overcrowded.

Hannan’s tweet was offensive to those who still suffer, many said on Twitter. One wrote: “Really @DanielJHannan? LGBT people in 22 Commonwealth countries can be imprisoned for who they are. They don’t have an EU charter of rights.”