Britain’s Conservative government is guilty of “grave and systematic” violations of disabled people’s human rights which are “regressing on an unprecedented scale,” the United Nations will hear on Monday.

The UN in Geneva is undertaking its first periodic review of the UK since it ratified the Convention on the Rights of Disabled People (UNCRPD) in 2009.

The founder of Disabled People Against Cuts (DPAC), Linda Burnip, told RT that welfare cuts, a lack of accessible housing and cuts to social and healthcare services, among other issues, are placing the UK government in breach of the convention.

“The government austerity measures have resulted in mass regression of rights in virtually all areas of disabled people’s human rights from access to independent living, loss of an adequate income, lack of accessible housing, lack of employment opportunities through to an increase in segregated education.”

She says the UK has “failed dismally” for disabled people, adding that the “savage cuts” have meant disabled people’s rights have been and continue to be violated. 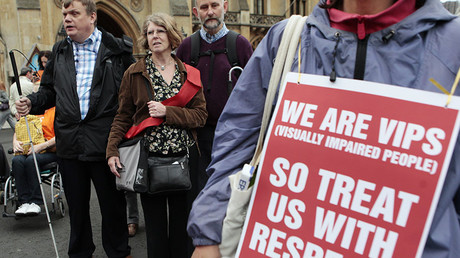 “The UK government since 2010 has been guilty of the grave and systematic violation of disabled people’s human rights and those rights have regressed on an unprecedented scale.”

Burnip said the government’s claim it spends £50 billion (US$64 billion) a year to support disabled people is false. She says an Institute of Fiscal Studies report shows the actual spend on all working age benefits for disabled people is just over £28 billion.

The UN committee will hear from Disability Rights UK, which met with disabled people across Britain to gather evidence. Its report accuses the government of “dismissing … the lived experiences, views and interests of disabled people in the UK.”

Kamran Mallick, chief executive of the charity, told the Independent: “Many of the government’s answers have a tone of complacency at best and high-handed evasion at worst.

“The government produced no evidence or detail to show how it is supporting people to lead independent lives; something it committed to when it ratified the convention in 2009.

“The government document also makes grand claims about the impact of the Equality Act and the Care Act that simply don’t reflect the everyday experiences of disabled people in the UK.”

The charity details the experiences of many disabled people, including a wheelchair user who was denied available housing after being on a waiting list for six years because of the so-called bedroom tax policy.

He now has to “crawl up the front steps into his house and haul himself on his backside to get upstairs.”

A government spokesperson said in a statement: “The UK is a recognized world leader in disability rights and equality, which is why we supported the development of the UN convention.

“Almost 600,000 disabled people have moved into work over the last four years and we spend over £50 billion a year to support disabled people and those with health conditions.

“This first periodic review will help build on our progress to empower disabled people in all aspects of their lives.”