The US’s status as the biggest G7 economy has customarily allowed it to steer the agenda of the club’s summits from its place at the top, the other countries following its lead. But Donald Trump chose a different tactic.

There were too many flagrant deviations by the US delegation from established etiquette to consider it a simple sign of Trump’s erratic boorishness. Instead, it appeared that American president was in no mood to compromise, and had every intention to aggravate.

Arriving late to miss a face-to-face with Emmanuel Macron, snubbing Theresa May while leaking pointed comments about her “school mistress” tone, tardiness at the official breakfast on Saturday, and skipping a climate change discussion to leave early, only to give a casual press conference on the way out – all of these were extravagant diplomatic displays of disdain.

While some have reported that Trump simply never wanted to go to Quebec, others believe he is following the well-known conflict strategy in negotiation, in which he scares his supposedly saner counterparts into granting him his wishes just to avoid the greater risks he is prepared to take. The only man with a counter-strategy to the man-with-the-bomb act appeared to be Emmanuel Macron who simply decided to death grip Donald Trump’s hand until it turned an alarming shade of white, though it remains uncertain if the move was effective. 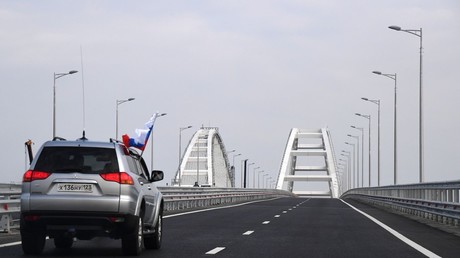 There is no better way to rile up the rest of the G7 than by suggesting that it welcome Russia back at the exact moment when relations between Moscow and the West are hitting a new nadir on a weekly basis.

Trump mentioned this proposal at every single press opportunity, straight-facedly talking about how reintegrating Moscow would be a boon to world peace, and even had the chutzpah to suggest that some (unspecified) countries actually agreed with the proposal.

Discussing Crimea as an Obama-era issue also implied that the current administration may not regard the fate of the peninsula as an immovable issue resulting in eternal sanctions, a contravention of the “not an inch” rhetoric from Europe.

Many political rivals and analysts considered Trump’s pet obsessions – such as building that wall – wrong-headed or impractical, believing them to be empty campaign promises or fantasies. They are probably still surprised that the US president did move the embassy to Jerusalem, and actually quit the Iran deal.

And Trump’s trade balance hobby horse is one of his sturdiest, and could single-handedly explain his entire performance in Quebec.

Painting the US as a victim of its haplessness – “the piggy bank that everybody is robbing” including a “brutal” EU – as a result of asymmetrical tariffs, Trump announced his aluminum and steel levies in advance of the G7, and didn’t let the topic go, only to turn around at the last moment and suddenly suggest dropping tariffs altogether.

In one of the mostly tonally odd moments of the entire summit, Trump at one point announced out of nowhere – in a mix between a deadpan joke and a power move – that Canada had agreed to drop all tariffs, with Justin Trudeau standing next to him bemused (“we have a ten out of ten relationship,” Trump told the media).

With Russia out, none of the BRICS countries were represented at Charlevoix, and economic data shows that with each annual summit the share of the seven keeps falling in relative terms, as the rest of the world catches up.

But libertarian economist Jeffrey Tucker believes the problems run deeper than that.

“The world economy is increasingly decentralized and integrated in a way that eludes control by anybody – whether it’s G7, G8, G20 or G200,” he told RT. “It’s hard to know if in the future these bodies will have much relevance to the way the world economy operates.”

So if it is not their economic heft, and their once-vaunted political unity that these seven countries are projecting what is it exactly that the G7 is offering, either to those posing the “family photo” or those in the wider world?