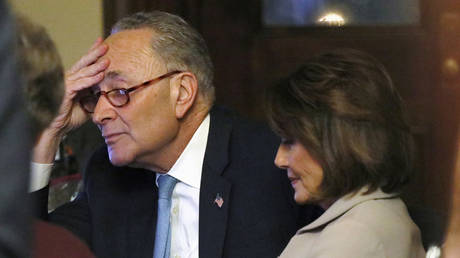 Unhappy with the way the White House is rolling out the redacted version of the special counsel’s report to the public, leaders of the Democratic Party want Robert Mueller to testify before Congress.

House Speaker Nancy Pelosi and Senate Minority Leader Chuck Schumer issued their statement ahead of the planned press conference by Attorney General William Barr and the publication of the redacted report on the probe into alleged collusion between Donald Trump’s presidential election campaign and Russia.

The probe, which lasted for almost two years, came to the conclusion that there was no collusion, delivering a severe blow to the ‘Russiagate’ narrative pushed by the president’s opponents.

The only way to begin restoring public trust in the handling of the Special Counsel’s investigation is for Special Counsel Mueller himself to provide public testimony in the House and Senate as soon as possible.

AG Barr’s handling of the #MuellerReport has been regrettably partisan, including his slanted 3/24 summary letter, irresponsible testimony before Congress, & indefensible plan to spin the report in a press conference today—hours before he allows the public or Congress to see it.

Democrats were unhappy with the summary of the report delivered by Barr at the end of March. They have also criticized the decision to roll out the 400-page report with a press conference first as an attempt to control the narrative. The Department of Justice usually holds a media conference before releasing the results of major investigations. But this time, several House Democratic committee chairs demanded that Barr cancel the “unnecessary and inappropriate” presser planned for 9:30am on Thursday.