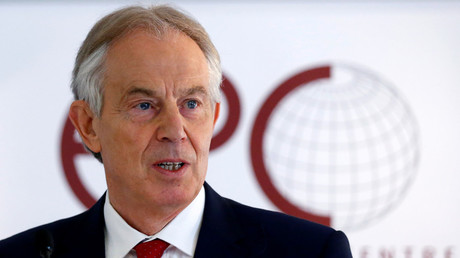 Tony Blair has issued the Tories a warning: block Brexit or face a Corbyn government. The comments, made during a speech at Speaker’s House, have caused many online to question if he should retain Labour Party membership.

The ex-PM is renowned for his constant, outspoken opposition to Brexit. Last night, he rehashed previous calls for a second referendum to allow Britons to have the final say as to whether or not the United Kingdom exits the bloc.

In a speech in Parliament at Speaker’s House on Monday, Blair gave a warning to the Conservatives that left many on social media wondering where the former prime minister’s allegiances actually lie.

READ MORE: New Year, old faces: Bad-penny Blair is back offering opinions no one asked for

“As for the Conservative party, I understand why they feel they must deliver Brexit as ‘the will of the people.’ I understand also why they believe that delivering it is the best inoculation against a Corbyn government.

“Think ahead. Before the end of 2020 we will know the real deal. There is then another 18 months to an election. Think June 2022. Will the economy be stronger? Will the Brexit news be better? Will people be feeling that Brexit has really delivered all that ‘control’ we say we don’t have now? Will the NHS be on the mend? Will the free trade agreements be stacking up?

“The 17m who voted ‘Leave’ may be short on gratitude. The 16m who voted ‘Remain’ will be unlikely to forget. Remember that 13m wins an election. Brexit is not the route to escaping a Corbyn government; it is the gateway to having one.”

The left side of Twitter was soon afire, with many asking why Corbyn should hold Labour Party membership after such comments.

Tony Blair. So, how is telling Tories how to avoid a Corbyn government compatible with party membership?

Incredible! Why is Blair still allowed to be a Labour Party member? Can somebody flag this as a complaint worthy of NEC investigation?

Others were incensed by Blair’s comments. One Twitter user launched a scathing attack on “treacherous” former Labour leader.

Labour members should remember that Tony Blair has spoken out more against Corbyn than he has ever done about Tory austerity and that’s all you need to know about him. #Newsnight

Some donned their tin-foil hats, wondering if Blair’s comments on Corbyn had anything to do with the upcoming local elections… and others just sat back and enjoyed the drama unfold.

It all a smoke screen started last Monday by David Miliband just before the local elections now it definitely a smear as Tony Blair is now speaking out against corbyn the cult cry no it ain’t #russia#Antisemitism#brexit labour are a shambles!

Somehow I don’t think Tony’s plan is going to work, but fascinating to see the establishment in such utter panic over the possibility of a socialist govt:
“Tony Blair tells Tories to block Brexit if they want to avoid Corbyn government” https://t.co/1uKdHtHaTP