Far-right activists’ Facebook pages, including those of Tommy Robinson and Britain First, received special protection from the company as they ‘generate revenue’, a Channel 4 documentary has found.

A reporter for Channel 4’s Dispatches went undercover in Facebook’s largest center for UK moderation, CPL Resources. Over a six-week period in the company’s Dublin offices, they revealed the practice of ‘shielded reviews’, a process that allows for the protection of certain pages, even after a pattern of behavior was established that would typically result in a moderator taking action. 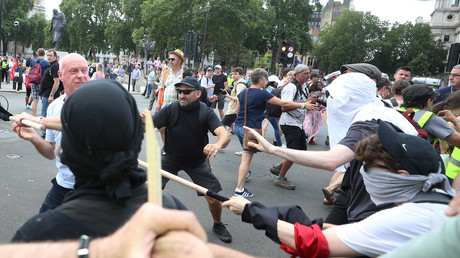 Pages that contain five or more pieces of content that violate Facebook’s rules are typically deleted. Popular pages, including those of British far-right activists, were, however, protected from those stipulations with moderation passed on from external contractors to Facebook’s in-house staff.

The practice is largely applied to the pages of news organizations or governments but was extended to Britain First, a one-time far-right political party whose leaders are currently jailed for religiously aggravated harassment, and ex-EDL leader Tommy Robinson, also in jail for contempt of court.

In the program, a moderator tells the undercover reporter that, despite numerous rule breaking, the pages in question were left up as they “have a lot of followers so they’re generating a lot of revenue for Facebook.”

At the time of publishing, Robinson’s page has over 900,000 followers. At its high point, Britain First’s now-banned page boasted around two million likes, and was, according to anti-fascist organization Hope Not Hate, the “second most liked Facebook page in the politics and society category in the UK – after the royal family.”

The social network company has called the practices “mistakes,” adding that they do not “reflect Facebook’s policies or values.”

The Dispatches program also found that contracted Facebook moderators would always ban images of nudity while failing to prohibit content showing violence against children, racism, and images of self-harm.

A moderator filmed for the documentary said: “If you start censoring too much then people stop using the platform. It’s all about money at the end of the day.”

Facebook’s vice president of global policy solutions and Liberal Democrat peer, Lord Allan, defended the company, stating: “There is a minority who are prepared to abuse our systems and other internet platforms to share the most offensive kind of material.