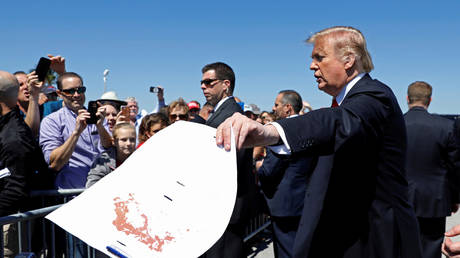 US President Trump has again boasted of victory over Islamic State terrorists. This time they’ve supposedly fully lost territorial control in Syria, but US-backed militants actually fighting IS on the ground disputed this claim.

“Here’s ISIS on Election Day. And here’s ISIS right now,” Trump told the reporters “You guys can have the map. Congratulations. I think it’s about time.”

Earlier on Friday, White House spokeswoman Sarah Sanders stated that IS (formerly ISIS/ISIL) no longer held any territory in Syria, citing US acting Defense Secretary Patrick Shanahan, who had briefed Trump on that purported milestone.

The bold claims of –supposedly– the ultimate defeat of the terrorist group have quite unexpectedly come under friendly fire, from the Syrian Democratic Forces (SDF) militant group. Mustafa Bali, the head of SDF press service, personally challenged Trump’s claims on Twitter. To add insult to injury, he posted pictures to prove what has really been happening in the area.

The Kurdish-led group, backed by the US, is actually fighting IS on the ground in eastern Syria. Over the past few weeks the fighting concentrated around the Baghouz area, where IS fighters and their families have been holed-up in a makeshift camp. On Wednesday, Trump had already managed to jump the gun on the subject of the final defeat of IS, on that occasion promising the group’s destruction “by tonight.”

Also on rt.com
Trump says ISIS to be defeated ‘by tonight’ – but 400 US troops will stay in Syria