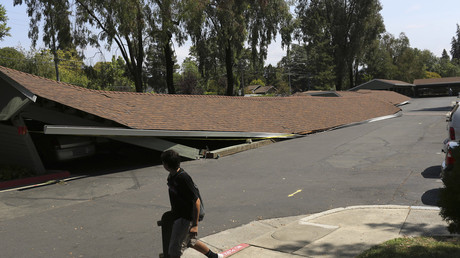 Geophysicists are hypothesizing that the San Andreas fault line in California could be the central point of a massive earthquake after new research suggested that the fault may be at higher risk than previously thought.

Researchers at Arizona State University have published a new study looking at the likelihood of a 7.5-magnitude (or stronger) quake occurring and rupturing the entire fault line.

It has long been thought that the central section of the fault line, which stretches 90 miles from San Juan Bautista southward to Parkfield, was creeping steadily in such a way that provided for the safe release of energy. That “creeping” movement, scientists believed, lessened the chances of a huge quake rupturing the entire fault line — but new research casts doubt over old assumptions.

The researchers found that the fault line has seen a sequence of “stick-and-slip” movements, or “slow earthquakes,” which release energy over a number of months. These slow earthquakes pass without being noticed by people, but they can trigger larger and more destructive quakes in the region.

“What looked like steady, continuous creep was actually made of episodes of acceleration and deceleration along the fault,” said Mostafa Khoshmanesh, a graduate research assistant in the ASU’s School of Earth and Space Exploration (SESE) and the lead author of a paper on the new research.

Another researcher, Manoochehr Shirzaei, who is the co-author of the paper, explained that the movement on the fault began every “one to two years” and then lasted for several months before ceasing. The pattern of these slow quakes led to “increased stress” on other segments of the fault, north and south of the central section.

The scientists found that the central part of the fault has an average movement of about three centimetres a year — or just over an inch. The distance sometimes varies, they said, some years moving by as much as four inches.

The authors of the research say that their findings are significant because they have uncovered a new kind of earthquake-triggering movement which is not accounted for in the current models of prediction used in the state.

Shirzaei said that, based on the new observations, he believes the seismic hazard in California is something that varies over time but is “probably higher than what people have thought up to now.”

So when is it going to happen? Well, that’s the big question.

No one really knows, but Khoshmanesh explained that based on current models, there’s a “75 percent chance” of a magnitude 7 or larger quake in northern and southern California “within the next 30 years.”