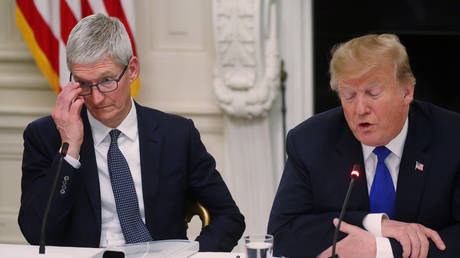 A lot of people have trouble remembering names but Donald Trump seems to take it to a new level, managing to mangle Apple CEO Tim Cook’s name right to his face in what is just the latest such blunder for the US president.

While there’s no telling just how many famous figures Trump has forgotten the name of during his presidency, here is a list of some of his most notable and public name bloopers:

Trump called Apple CEO and one of the most recognisable figures in tech Tim Cook “Tim Apple” on Wednesday as the pair sat before the press. “We appreciate it very much, Tim Apple,” Trump said as he sat next to Cook, who had a paper name tag in front of him that clearly read “Tim Cook.”

It’s actually not the first time the president has mistaken a person’s second name for the company they work for. In March 2018, Trump called Lockheed Martin CEO Marillyn Hewson “Marillyn Lockheed” while introducing her at the White House.

Even Trump’s own staff are not exempt from the odd name switch, he has repeatedly referred to his National Security Advisor as “Mike” Bolton, instead of John.

Apparently this particular blunder is common for poor John-not-Mike Bolton. According to the New York Times, he “does not have the same relationship with Mr. Trump that he had with Mr. Bush,” with the president repeatedly calling him “Mike” among White House aides.

And it’s not only presidential staffers that suffer this affliction: Trump extends the dubious honor to senior Republicans. Before he resigned, Speaker of the House Paul Ryan was repeatedly referred to as “Ron” by the president during a praising speech in “Ron’s” own hometown, no less. Ouch.

In January, President Trump confusingly referred to Republican House Minority Leader Kevin McCarthy as “Steve,” before then motioning to an actual Steve, House Minority Whip Steve Scalise, to come over. Whether he thought both men were genuine Steves is not clear.

Clearly, Mike is a preferred name for the president as he also called a Republican from Indiana Luke Messer by the same moniker while thanking him for his support of the GOP tax bill at an event in Indianapolis in 2017.

Don’t you just hate when you try to call out a disgraced former head of the Democratic National Committee in front of your 60 million Twitter followers but you don’t know her first name? Yeah, that happened to Trump last April when he publicly denounced “Wendy”Wasserman Schultz for her role in the DNC Server scandal. The tweet was of course later deleted and replaced with a corrected version.

Last August Trump repeatedly called Customs and Border Protection (CBP) the wrong acronym – not once, but EIGHT times throughout his ‘Salute to the Heroes’ speech.

It’s not the speechwriter’s fault.

I’m standing next to the teleprompter Trump is reading from in the East Room and it says CPB.

The official White House transcript went with a rare “(sic)” for Trump’s “CBC,” which the transcript shows he said eight times at his event honouring CBP, which he didn’t say at all. pic.twitter.com/mWPZqNAvhx