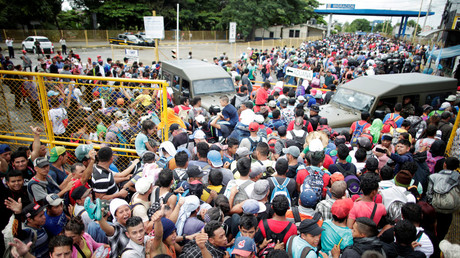 Thousands of migrants have arrived at the Mexico-Guatemala border, with some climbing over the fence separating the two countries. US President Donald Trump has threatened to close the US-Mexico border and call in the military.

Photos posted online show some of the migrants breaking down the fence’s gate and continuing towards the border bridge.

Mexican television footage showed the migrants being met by dozens of riot police on the bridge who blocked them from entering Mexico. Some could be seen jumping into the river below to get around the block.

More than 3,000 migrants are demanding they be let into Mexico, and ultimately through to the US, with many heard chanting “We want to work!”

Others shouted, “We are not smugglers, we are immigrants!”

Most of the migrants are from Honduras, but some have joined the caravan from other Central American countries.

On Thursday, Trump referred to the caravan as an “assault on our country,” citing “criminal elements and drugs pouring in.” He encouraged Mexico to “stop this onslaught.”

He later thanked Mexico for sending police and riot gear to the Mexico-Guatemala border, saying that the US looks forward to working with the country.

Earlier on Friday, Mexican Foreign Minister Luis Videgaray vowed to meet the “challenge” of the caravan, after holding talks with US Secretary of State Mike Pompeo in Mexico City.