Freedom begins between the ears. 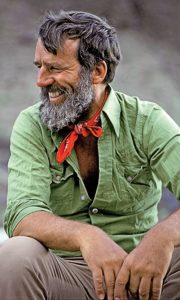 “What do old men who don’t believe in Heaven think about?” queried Edward Abbey rhetorically in his masterpiece Desert Solitaire. “… they think about their blood pressure, their bladders, their aortas, their lower intestines, ice on the doorstep, too much sun at noon.” In other words, they think about postponing dying, though many may never have gotten around to actually living.

To die well, one must live fully, Abbey thought, and dedicated himself to the task.

Faced with terminal illness in late middle age, he never bargained with God for more time or experienced any of the alleged “stages” of accepting death that psychiatrist Elizabeth Kubler-Ross says we all inevitably pass through. The reason? For Abbey it was not death or dying that was tragic, but rather to have “existed without fully participating in life – that is the deepest personal tragedy.” He was…