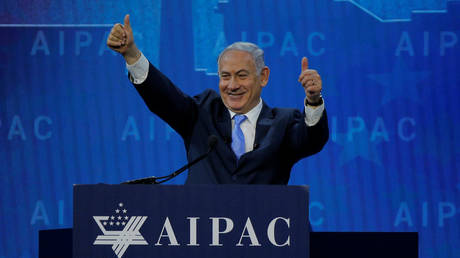 Influential progressive activist group MoveOn.org has a favor to ask 2020’s army of Democratic presidential candidates: steer clear of the AIPAC conference. Do not pass Go; do not collect hefty campaign checks.

The activist organization with ties to controversial billionaire George Soros called on the growing swarm of Democratic candidates to boycott the pro-Israeli lobbyist conference, long considered a rite of passage for American politicians. While AIPAC itself only spent about $3.5 million lobbying last year, its influence lies in matching wealthy donors with favored candidates, “bundling” enormous sums to those it believes will do the most to advance Israel’s aims stateside.

#2
AIPAC has been known to peddle anti-Muslim and anti-Arab rhetoric while giving platforms to those involved in human rights abuses.

MoveOn listed four reasons to stay away from AIPAC, including its efforts to defeat the Iran deal – which have found a sympathetic ear in President Donald Trump – plus its Islamophobia, its refusal to condemn Republican anti-Semitism, and its tacit acceptance of Israel’s long history of alleged war crimes, as well as the increasingly overt racism of the Jewish state.

The group specifically attacked Israeli PM Benjamin Netanyahu for forging an alliance between his right-wing Likud Party and the even-further-right Otzma Yehudit, or Jewish Power Party. Citing the faction’s links to the Kach party, which the State Department has declared a terrorist organization and Israel has banned entirely, MoveOn slammed Netanyahu for cozying up to the “Israeli KKK.”


While mostly symbolic, MoveOn’s boycott request points to a seismic shift in American politics, with the issue once considered the “third rail” of American politics – criticizing or even acknowledging the Israeli lobby – now becoming an asset.

Responses to the gesture were largely positive,

AIPAC is toxic. Thank you!

As an Israeli-Jew, I applaud @MoveOn‘s call on 2020 candidates to boycott AIPAC’s conference. AIPAC cynically uses the real threat of anti-semitism to silence criticism of Israeli’s atrocities against Palestinians. It is a shameful organization that doesn’t represent me. https://t.co/NJWReIpLuf

Though some felt the candidates would choose AIPAC’s cash over MoveOn’s endorsement.

Others accused the Democratic party, MoveOn, or both of anti-Semitism

Anti-semitism is and has always been a Democrat thing. Ask Ilhan her feelings.

…and one clever Tweeter thought to check the roster for AIPAC’s ‘Connected for Good’ conference, which lists none of the 2020 candidates – though it does include some of the loudest voices to condemn anti-Semitism, real or imagined, in the Democratic Party, including Reps. Lee Zeldin (R-NY), Kevin McCarthy (R-CA), and Elizabeth Cheney (R-WY).

While AIPAC has always boasted of its bipartisan influence, Democratic support for Israel is at historic lows even as Republicans remain staunchly pro-Zionist. With Netanyahu clinging closer than ever to Trump in the face of bribery scandal probes and looming elections, Democrats are finding themselves more alienated than ever from the Israeli government. A recent UN resolution condemning the Israeli sniping of unarmed Palestinian protesters has only strained the relationship further, and the willingness of freshman Rep. Ilhan Omar (D-Minn.) to criticize the lobby’s influence in US politics has emboldened others in the party to speak up.


Even if they don’t keep the candidates away from the financial feeding frenzy, MoveOn’s demands will “give a clear insight to 2020 candidates on where their base stands instead of prioritizing lobbying groups and policy people,” said MoveOn campaign director Iram Ali.