The former Business Secretary launched a scathing attack on May’s first Conservative Party Conference speech last year, where she told attendees that “citizens of the world” are actually “citizens of nowhere.” 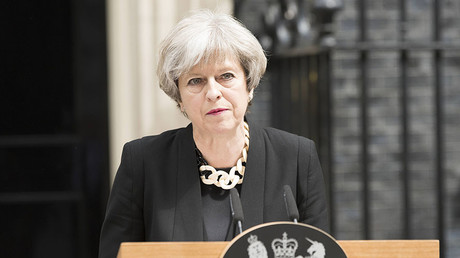 Cable, whose late-wife Olympia was originally from Kenya, hit out at the remark.

“It could’ve been taken out of Mein Kampf. I think that’s where it came from, wasn’t it? ‘Rootless cosmopolitans’?” Cable told the New Statesman magazine on Wednesday.

“It was out of character for her.”

May faced criticism following her 2016 party conference speech, in which she appeared to be pushing a kind of post-Brexit nationalism.

“Today, too many people in positions of power behave as though they have more in common with international elites than with the people down the road, the people they employ, the people they pass on the street,” she told Tory delegates.

“You don’t understand what citizenship means.”

“It is disappointing and surprising that such an experienced politician, who wants to lead the Liberal Democrats, chooses to throw around Nazi slurs like Ken Livingstone.

“Vince Cable should reconsider and retract this ill-judged comment.”

Although the term “rootless” did not appear in Mein Kampf, it was used in Russia’s Soviet era newspaper Pravda to describe Jewish intellectuals.

In an article criticizing “one anti-patriotic group of theatre critics” the author wrote: “These critics have lost their sense of responsibility to the people.

“They represent a rootless cosmopolitanism which is deeply repulsive and inimical to Soviet man.

“They obstruct the development of Soviet literature; the feeling of national Soviet pride is alien to them.”

Cable’s comments come soon after May was likened to a Chinese dictator for her newly-proposed counterterrorist measures.

May announced she would scrap human rights laws if they stood in the way of implementing new measures to restrict the freedoms of terrorist suspects.

Her bid to toughen counterterrorist strategies comes after the country was hit by four terrorist attacks in four months.

Her plans include fining web giants if they fail to act upon the spread of extremist propaganda.

Max Hill QC, the UK Independent Reviewer of Terrorism Legislation, however, called into question the effectiveness of the new plans

“What is the appropriate sanction? We do not live in China, where the internet simply goes dark for millions when government so decides,” he said, according to the Times.